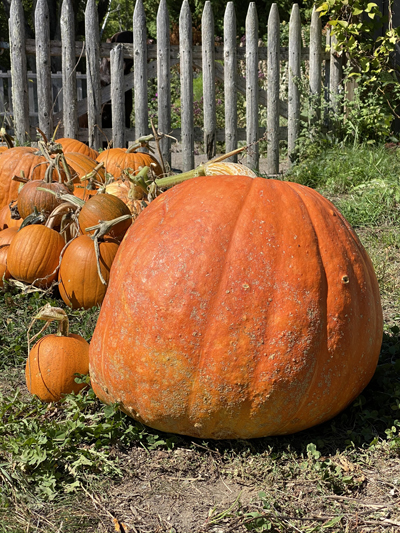 “Mrs. Dunn, may I speak to you?” I heard through the cracked window in the living room.

It was Earnest the pig, standing on the front stoop. “It’s about our pumpkin contest. I’m concerned,” he said.

Earnest and little Pickles the goat were having a pumpkin contest. I was to name the winning pumpkin later in the day. Earnest had wanted to be part of the local Pumpkin Festival, but due to the pandemic, there was no festival, but they still had a pumpkin contest. I swayed Earnest to have a contest here at the farm instead...telling him if he won he would also get a grilled cheese and cucumber sandwich from Eider’s–I was reminded of when I wanted to go to a Monkee concert when I was eight, requiring my father’s chaperoning me along with a bunch of little squealing girls. He sat me down and gave me a choice– I could have all three Monkee records, or concert tickets. I picked the records, and I know he was relieved.

“What are you worried about, Earnest?” I asked.

“My pumpkin is clearly the biggest. And Pickles can’t stop talking about her beloved pumpkin. She even named it Teeny Pickles,” he said. “I think we should adjust the rules. Can’t we have a ribbon for roundest pumpkin, and one for happiest pumpkin?” he asked. “That way, we will both be winners.”

“But maybe your pumpkin is both the roundest, and the happiest?” I asked.

“It’s kind of cheating, isn’t it? Or maybe being a bit dishonest?” I asked.

“She is so happy about her pumpkin–I don’t want to scar her little soul for life. She even named her pumpkin Teeny Pickles”

“Well, that is taking the high road, Earnest. Go tell everyone to meet in the pumpkin patch in one hour,” I said.

I whipped up some blue paper ribbons, one said, happiest, and one said, roundest. In precisely one minute before the hour was up, the animals had gathered at the pumpkin patch.

Pickles came leaping over everyone and everything to be by Teeny Pickles. She put her ear to the little pumpkin, then she stared to squeal with joy. “Teeny Pickles just told me a joke!” said Pickles. “Who helps little pumpkins cross the road safely? The crossing gourd!” and she and Teeny Pickles rolled on the ground laughing.

I guess she is a happy pumpkin, I thought.

“What will you do with your pumpkin, Earnest?” Pickles asked.

Pickles gasped. And she ran with her little pumpkin back to the safety of the barn.

I figured I would help Pickles understand that sooner or later, something was going to eat her beloved pumpkin...but now was not the time. 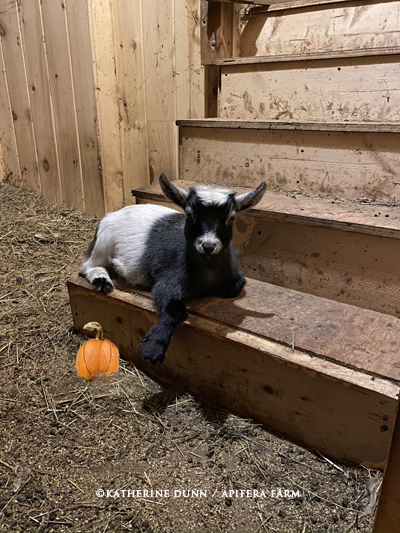 Posted by Katherine Dunn/Apifera Farm at 5:38 AM