One of the first of the elder cats to arrive...has died. 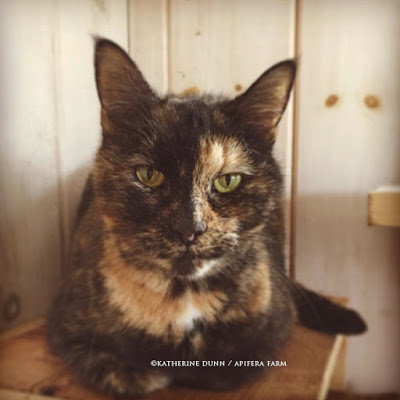 I arrived at feeding time this morning to find Anna dead. I knew she was starting to isolate herself in the elder cat suite, and was less bossy around her clan than usual. In the past couple weeks, she slept a lot more. She was very still yesterday and last night, she had left her felted cacoon to sleep in an empty bag. I knew her days were fading because she just wasn't interested in life, and wasn't interested in being upset if I tried to brush her too much. She wasn't sitting under the table at breakfast informing the other cats she was there first.

So, there she was, right at the door, outside the bag I'd left her sleeping in. Tommy and Yume were there, sitting, waiting for me. I wasn't surprised, but wasn't completely expecting it this morning.

Anna did me a huge healing service on arrival. We had just moved here in 2016 and some of you might remember the traumatic even where Itty Bitty Etta jumped out of the trailer, just as we were setting out on our journey. We could not find her, and she clearly stated she wanted to stay on her land to roam as she had since her birth in a culvert on the highway. She would have been miserable inside all day and to this writing she still lives at the old farm. But it was so upsetting for me. On arrival we brought in three elders from the shelter–Anna, Sir Tigger and Yume. I thought Anna sort of resembled Itty, but in time I realized she really didn't, but what mattered is I thought she did, and it helped me get over that difficult episode.

Anna was 15, not that old in my terms of what old is since we take on the really old ones. I know she helped me, and I helped her. She had four+ years in which she might have lingered at the shelter. I gave her that space and atmosphere and that is all I set out to do-give them a place to be themselves and not be stressed.

Why she died I don't know. As I've stated before, often we ask "Why?" and the answer is, "Because."

Thank you for helping me, Anna. I will miss seeing you in your window. 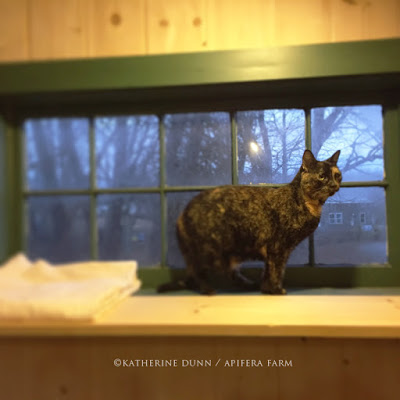 Posted by Katherine Dunn/Apifera Farm at 7:44 AM