A name is chosen...see what I go through? 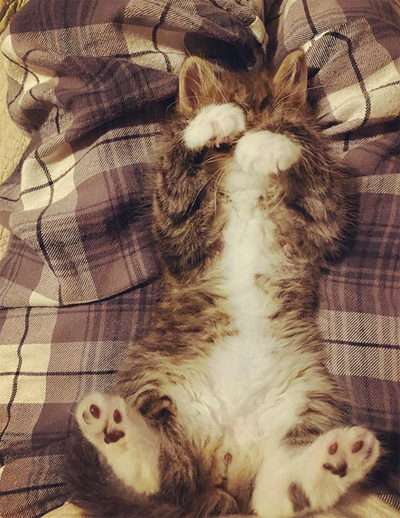 If you follow along you know I take naming an animal very seriously, treating it like any other creative project. I guess it is my imagination, but I always feel a huge responsibility for naming or renaming an animal. It can take me weeks sometimes, to get to see the spirit or intent of the creature. Sometimes it comes easily but often it doesn't. The other thing is I often think, if  I give a name that is not matched with the true destiny of the animal am I shifting its path in life. I mean, if Officer Mittens had been named, say, Macbeth, would he still find a way to join the police academy? I was about to be named Mary, but my paternal grandmother died on the day I was born and I was named Katherine. I can not imagine being named Mary [no offense to all the Mary's but I just am not a Mary].

I posted a list of finalist on social media a few days ago. I was immediately alerted to the fact that one of the names had other insinuations-I think you can see which one. I just didn't see it! But when I did, I decided to leave it on the list since I thought it was a funny misstep. The choices were: Franklin Muffinpants; Spencer Catfish, Esq; St. Francis Buttons; The Honorable Puff; Chief Mittens; and Master Bates.

I assume you can see the one that was deleted, everyone else did but me.

We were feeling the Spencer Catfish Esq. was the choice. But I realized that night he just did not feel like a Spencer or a Catfish. I have always loved the name and it has been on my animal naming lists over the years. But the kitten has this innocence about him, not really that mischievious, not bossy [of course this could change]. I loved the idea of having a Chief but again, maybe he doesn't want to be an officer. Maybe he wants to be a writer, like Earnest the Pig, or a poet like Paco.

I suppose too, he might just want to be a cat.

See what I go through?

It became clear to me he had to be Franklin. Not Frank, or Frankie [we've had both and I love thaat name] but he is a Franklin. Franklin Muffinpants.

But I'm going to keep that list for future needs.

Posted by Katherine Dunn/Apifera Farm at 5:24 AM