My one wish if I were to be granted one 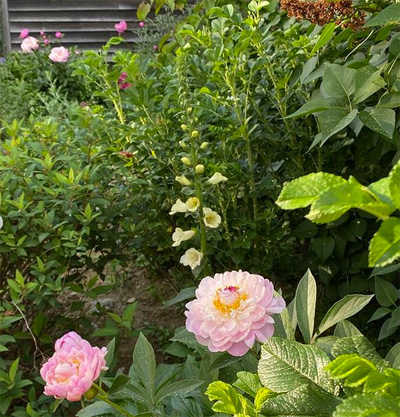 We work hard here, but we enjoy it. I get so uncomfortable when people suggest we need to relax more. Um...I do relax, it's called tv time and bedtime.  We really love to be physically active and have projects. If we didn't like it, we'd stop. I find that people often, with good intentions, project on to other people. When I moved to the old farm out west, I was 43, and a woman who had lived on a small farm for 25 years and was starting to transition out of it, suggested that I should hold back on acquiring lots of animals. I said I was just getting started on something I'd always wanted-a farm, to raise sheep and have a horse. I realized though that she had been-there-and-done-that and was just projecting that on to me.

I have a wonderful routine here. I get up and take the dogs with me, and they romp around while I do front barn feedings and chores. Then I put them back in, because I won't leave them alone with fowl, and then I go out to horse barn and feed and do chores. I come back at some point and let the dogs out and I sit and have coffee and watch the animals roam around, I smell the sea, I look at the garden...then I either do studio or office time until lunch, and then it kind of starts all over again. I have gotten way better at not over scheduling myself because I like lots of in between time for just percolating. So you see, I really do sit a lot, and think, and feel.

Since I'm 63 now, I know many people who are well into their 70's or older. Many are downsizing, as they say. I think about what will happen to us. I hope we can live our lives independently, here. It's the kind of farm we could maintain on our own with a few adjustments. I can't imagine -at this writing-leaving. But that too is my current state of mind projecting onto my future state of mind. Big changes in life require a process [unless a change is thrust on us through no fault of our own, say, losing a spouse]. I know I never thought I'd leave the old farm when we did, after 15 years, after putting so much love and sweat into it...but we did, but that decision was made in a series of epiphanies, probably over about two years. But once made, it went fast and here we are in Maine. It was such a good decision on so many levels.

This is our third garden we have created together. I never thought I'd have a garden I loved more than the last two, but here it is. The sea is right across the road [we do not have water property, which has its blessings, but we get to see the cove]. I think of my parents a lot when I'm in this garden, so many flowers here they would love, especially the peonies which we had in Minnesota. We have their old teak garden benches they always had in all their many gardens and they gave them to us when they moved for the last time. I cherish them. How many times did I sit with them on those benches in their rose garden, sipping coffee, sharing gossip or crying over some old boyfriend?

I guess that is one wish I would grant us, if I were able to grant wishes–that Martyn and I live together, in a home, until we die. I put that out to the universe all the time. I pray for it. 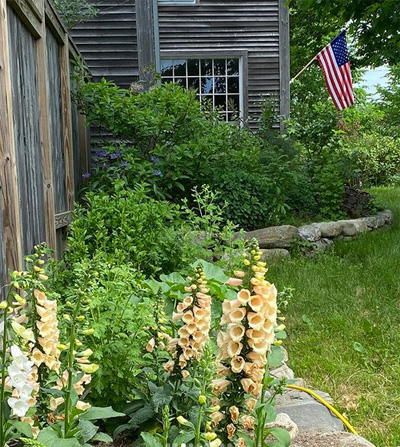 Posted by Katherine Dunn/Apifera Farm at 9:29 AM