To the infamous Miss Careless 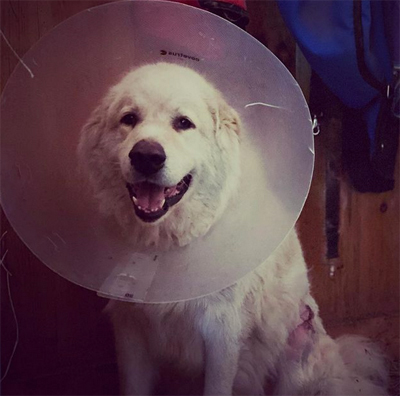 Thanks to so many that sent White Dog, and Martyn and I, love and empathy in the past two days since the accident. If you follow us on social media, you know it was our human error after a long day of working on Earnest’s paddock that caused this accident and suffering to one in our care, namely White Dog. We felt his pain and we suffered and still do emotionally. He is on 19 pills a day for 2 weeks, and his two wounds are sore for him, especially the deep buttock area that went deep into muscle.

As I posted online, it was a double whammy to have someone leave a one word comment, “careless”, yesterday on my post. If anything was careless it was her choice of words. Was it careless? Leaving the chop saw out in Earnest’s paddock would have been careless. It was an error…it was a human error. The gate was closed but not secured. After working non stop for the entire weekend to make Earnest's paddock even better than it was (he’d never gotten out in a year) we were tired and we made a mistake. Earnest had a skirmish with White Dog a year ago, in which the wound required stitches. It was caused, as usual, by territoriality over food when I was running White Dog out of a paddock. From that day on, we built a separate hut and paddock for the pig, and his tusks. We also had his tusks cut down by the vet, requiring sedation. But tusks grow back, and those tusks only take seconds to gore an animal.

So to Miss Careless, the writer of the impactful one word comment, if anything was careless it was your choice of word, and the timing of it. Words have power and we all have the right to use them, but we also have a responsibility when using them. I visited your FB profile-there it was full of memes of love and light. But Miss Careless, actions speak louder than memes, and your action spoke loudly of who you are. You are not welcome here, and you are were banned on our other pages. I do thank you though for the $20 donation you made in 2017.

The discussion amongst my followers-many I'd never heard of and many I had-that came from this was civil and kind, and helpful too. Your comment literally kicked me in the gut that day, the same day I still had blood all over my pants and in my car from White Dog's wounds. I am not so thin skinned that I can't brush off trolls or commenters that are out of line, I usually just walk on by and don't waste energy on them. But your comment deserved attention, and attention is exactly what it got-but it got turned around into good from empathetic people that know that there is nothing careless about what we strive to do here, day in and day out, without pay, without vacations, without help. I doubt you could get by one day here and do what I do physically and emotionally.

Again, thank you to everyone who supported us emotionally. It was important.

Posted by Katherine Dunn/Apifera Farm at 9:14 AM

Well said! I was steaming too.
Jean Carroccio