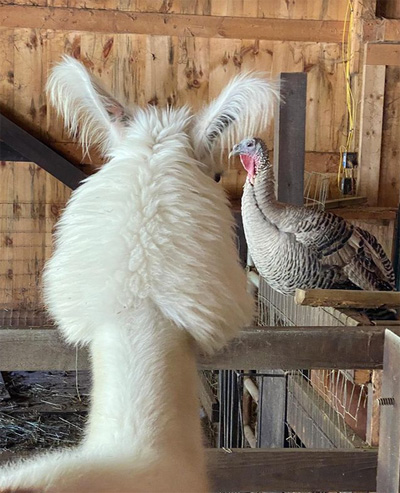 I was minding my own business...when a phone message came in from a woman I did not know. She politely explained she was moving overseas, downsizing everything in her retirement. She had raised her own food for years and at one point had turkeys. But the mother turkey attacked the hatchlings, and although she tried to save them all, only one survived. That turkey was lovingly cared for by the woman and she made the choice not to put her in the freezer [please, no judgement from anyone here, we all make our choices on what we eat-and as a partial meat eater myself, and someone who has raised her own food to avoid supporting factory farms, I applaud anyone who cares for their animals in life and death].

So the turkey became very friendly and imprinted on the woman. When it came to rehome all her chickens and fowl, she was concerned about RGB, aka Ruthie–she wanted  to find her a forever farm home, and somehow she heard of me.

Now, when I listened to the voice message, I was initially saying 'no' in my mind. I know nothing about turkeys, although I've heard some make nice barn pets. But I have a lot of fowl here and was just getting settled with the two naughty boy ducks [who suddenly have become gentlemen and are living again with the Pekin ducks]. And with White Dog's decline and cancer, I thought he might be upset by a larger fowl.

But then I heard the woman say she even thought Ruthie might be a good animal to take on visits to the elders.

But after talking to her at length, I felt her sincerity, and I agreed to take on RGB.

And I'm so glad I did. She is a lovely turkey. She has the perfect name as she is no push over, but she is not pushy with anyone and the first night I was worried she'd leave the open windows of the barn, but there she was the next morning. Each morning I arrive and she is usually on a perch in the White Dog barn. She wanders around at will staying close to the animals and barns. I can pick her up at will and hold her. Some nights she gets a bit grumpy [perhaps she is telling me, I am not a baby you don't need to hold me all the time], trying to peck my hand if she is perching. I learned from the woman that turkeys don't lay an egg a day like hens, they lay randomly and when they do they often hide the eggs, and they get a bit broody, and sometimes grumpy with you. I have not seen any eggs but they are very crafty.

I'm just thoroughly enjoying getting to know her and learn her language. She has beautiful pink coloring near her mouth and she is very pretty. Arlo the llama has more of a territorial feelings about her-which in fairness is part of being a llama. So I have Arlo and Teapot residing in the outside barn  versus the inner sanctum. That way Ruth can perch and there is no issue. I have seen her go into Arlo's area there, and she puffs up and stands her ground-but I only worry he might grab her neck. On the other hand, I've seen her in there with The Teapot and Arlo just stays a distance. But I don't want any accidents and in time Arlo will learn her space and his. Captain Sparkle also thought she was a space creature. But now they eat in the same place.

I think the moral here is...being open to new experiences. I was ready to say 'no' based on feeling tired about my current bad boy ducks. But the more I heard and read about too, I thought, I think she is meant to be here. And with the sadness hanging over me with White Dog and his cancer, having a turkey embodying RGB is a nice addition to my day.

The other thing that made me happy is when Ruthie and her former owner came, she was so happy to see the farm here and she just felt so good knowing Ruthie would have a good life and be free to roam in the orchards but have a safe spot at night. I know how hard it is to leave or rehome animals when a big relocation happens-we went through it with my sheep and some other creatures when we left Oregon-it is a heavy job finding homes and feeling you are doing the right thing for animal and human. So I was happy I could somehow lesson her load a bit, and she knows Ruthie is safe and happy.

Posted by Katherine Dunn/Apifera Farm at 11:03 AM

Email ThisBlogThis!Share to TwitterShare to FacebookShare to Pinterest
Labels: RGB aka Ruthie the turkey