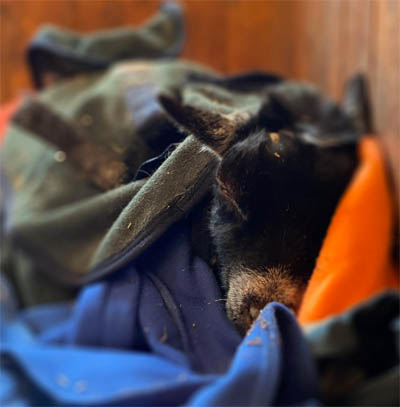 Cheese has died. I knew it was coming in the past week - she has been fighting being anemic which I've been treating her for. She's old and compromised and if it was due to barber pole or another parasite, even with swift help it often is a death sentence. But like I said, Cheese was 14 and that is old for a goat, especially a disabled, crippled one.

Yesterday she was weaker than usual but still trying to carry on, but kept getting knocked over. At one point I found her cast. It is very cold, and I did not want her to die unattended, by casting. So I got her in the a safe place, covered in six blankets - where I could proper her against wall to keep her from casting. I gave her pain meds.

The herd came to inspect my work and say their goodbyes. She died within a couple of hours and was pretty much gone even when the pictures were taken. The cold didn’t kill her but in her condition it most likely sped up her death by a few days. I’m grateful we were all their with her before she became unconscious.

I considered putting her in the heated cat suite, but the floor is slippery and it is an unknown space for her. She is a herd animal and I only considered it due to the extreme cold. But I knew her hours were numbered. Her time was here. She died hearing the familiar sounds of her clan, chewing hay.

Hail to you, sweet, determined Cheese. You were a trooper to go through life so boldly with your crippled legs. I will miss you greatly! I always loved seeing her in the morning and yelling out, 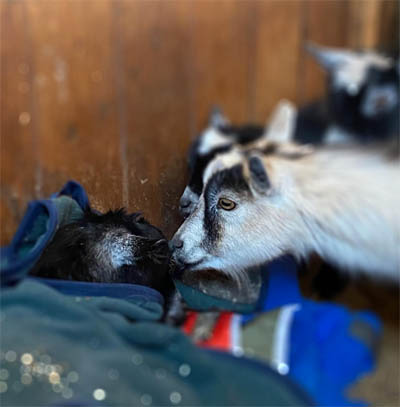 Posted by Katherine Dunn/Apifera Farm at 10:58 AM

Such a sweet face! Rest in peace Cheese. So glad your family was around to comfort you
as you started your journey.