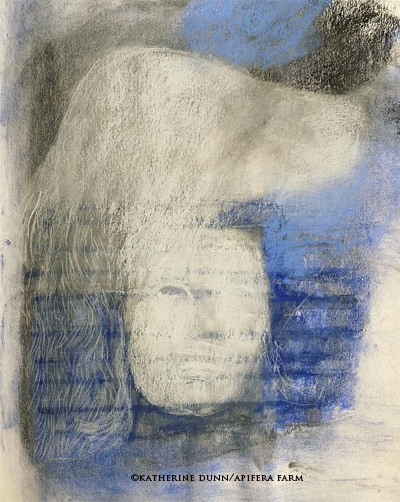 Grief is active, it's a process they say, and it is. It is a long project without a synopsis, I guess. White Dog's death -in case you can't tell-is a big loss for me, on so many levels. I was dreading it and now that it is here I was right to dread it because it hurts without him. The barn was his domain, and every creature had their respect of White Dog...even Earnest the pig who almost killed him with the intention of it [ a tussle over dropped food].

But it is a process, I'm familiar with the process, and I have Nature all around me. I got in the studio today, finally [the kitchen remodel has consumed us and my brain just can't focus but I had to take a break from that and be in studio for a few days].

I was talking to a friend about anger, within our grief. And I'm in it! It's funny how anger sneaks up on you and one moment you are calm and the next moment you are yelling at the top of your lungs in the barn at a hose-yes, a hose-while your animals quietly munch hay. That was me yesterday, the hose was not cooperating due to the cold temps, so I screamed at it, and I swore and strung together cuss words at the sky. In fact my anger made Ruthie start fluffing up her feathers and chortling. She wasn't sure why I was mad at a hose but she wanted no part of it.

Don't tell a grieving person not to have anger. If you stuff anger, it will catch up to you.

It's no a process that is linear. You don't walk through the stages of grief without taking a step back to a previous phase. You don't start with shock, then go to sadness, then anger then acceptance. You are in shock at first, and have moments of shock in the coming months. A photo can set you off. And anger is fluid I think, like love, anger twines around like a snake. You have to acknowledge it because if you are angry at a hose you are really angry about something more important. It's what you do with the anger.

So we get to have our anger. The kitchen remodel has also thrown 'order and control' out the window, but it is getting better [and will be so lovely, I will post pics when it is all done].

One thing I found myself being angry at the other day was the fact that my spirit animals have been taken from me, in succession. Birdie the llama, Opie the goat and now White Dog. All were just beginning their work as healing ambassadors. Opie was able to do that for four years, but White Dog was able to partake  here and Birdie really hardly got going but she was such a natural.

Why did the universe take those animals from me? There's no answer. It's not personal. But it felt like it. So I got angry, at the universe.

I'm getting used to not seeing him in his body. But every morning I walk past Old Apple, and walk right on the grave and say something as I go about my day. I know exactly how is body is laid out and I know Martyn's shirt is under his head. I know he's okay.

Mister Rogers told us to look for the helpers. I was doing chores in the barn, and was reminded that White Dog was a helper to me. He helped in many small ways-like barking at Captain Sparkle if he pushed a gate open when I was doing chores. He alerted me. He could keep certain animals in line if he knew there was trouble.

Who is my helper now? That is what it feels like in the outer barn. Plus I just miss seeing his beautiful, majestic face. 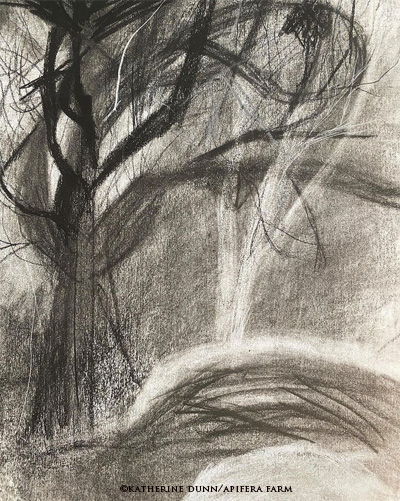 You are entitled to your grief in whatever form it takes. This overwhelming grief is a tribute to how deeply you loved White Dog & all of your animal friends. Hugs to you.

Katherine,
I don't know if I have any words to say that are helpful. Or even that you need or require any. I was shocked by Birdie's death. She brought me to Apifera with her sweet smile. I just fell in love right there.
This morning when I read that Biggs had kicked down his partition I thought it might be that he too was just mad.
I think I might miss White Dog and Birdie and Opie forever. Thank you for sharing your grief. Your process. Long armed hugs to you. Robin