She was thirty years old. She came to us out west, from a neglect case where she was being bred at age 19 without hay or supplements. Her feed were curled and back swayed, the latter never recovered from being bred year after year.

I'm so grateful we found each other. She had a wonderful life with us, and her little herd of minis. She and Paco were bonded. A week or so ago I noticed matilda had started separating out from her mini herd, which is not normal. I took note of it one night and said to Martyn, "The fact the donkeys aren't braying for her or joining her is telling."

In about four days after noticing that, it was farrier day, and Matilda was lying in the field and I had to try to get her up, She could still sit up like a dog, but my farrier had to push and i pulled. It was not a one person job. That was eighth days ago. Within another few days, she could no longer sit like a dog so we had to use the tractor to get her hind up with a strap, and I pulled and steadied her. I could not do it alone.

It became clear this was not a temporary thing. What was most upsetting for me was she had just had her annual checkup and bloodwork done for her Cushings, and her blood looked good. And she came out of winter so good, after a bad year last winter-we altered her meds and she improved so well. So we were all excited how good she looked. Within a couple of weeks after her checkup is when she declined.

I had an urgent call for the vet-knowing this was not an emergency since she wasn't in utter pain, but I knew if the vet came it was most likely the end of the road. I couldn't imagine they would have any other solutions, at her age. We talked about altering pain management that might help her get up. But even one day of her not able to get up was a problem. And Martyn can't keep coming home to help me. We also knew there are dangers to hoisting her up with the aid of the tractor. A downed equine is a hurting equine both physically and mentally. They are a flight animal. I could not leave her in the open field in case she went down in sun, and horse flies. She was beginning to get bed sores.

It was a beautiful day. The vet was due at 2:45. I spent the last hour with her grooming her, and just sitting. I cleaned stalls. She had her morning with the donkeys. It was a beautiful, clear, 65 degree day. The daisies were out. Martyn had stayed home and dug the grave. We anesthetized her, then led her to the grave-after a lengthy discussion about options, if any, and the right thing for her. There was the possibility she'd fight it. But she didn't. She was gone before she hit the ground.

I let the all the animals in to see her body and grave when it was over, as is our routine in burials. I was most interested and concerned for Paco. But he came over, sniffed, and ran off into his field. Like I said, I think the fact she had separated out of the herd, and they were not alarmed, showed they knew and had said their good byes. Donkeys are very loyal and protective of each other.

I awoke with relief -for her, and me. It is no fun knowing she would most likely be down, and unable to get up, and I was unable to get her up alone. I had hoped we could have summer together. But we couldn't.

I'm sad. I miss her big ears already. But I spent every day with her for so many years. I helped her and she gave me so much just by being her. She got to see America when we drove from Oregon to Maine. She had her mates and a nice barn. She was never hungry. She was safe. She had people come and visit and fall in love with her and her eyes. They loved her eyes because she wore her soul in them.

She was a very special Apiferian, never to be replaced, or forgotten. 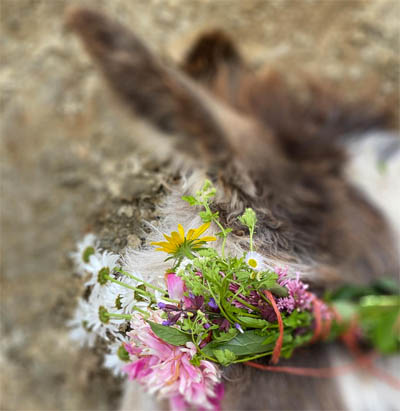 Posted by Katherine Dunn/Apifera Farm at 9:48 AM

I've just found your blog. So sorry about your beautiful Matilda. You saved her and showered her with love and kindness, something all creatures deserve in their lives. She was blessed, and so are you.