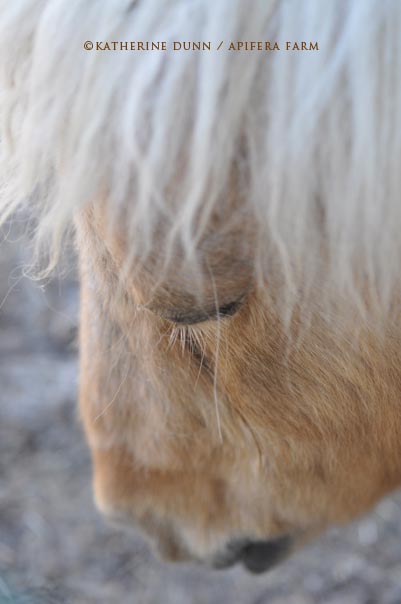 The day was over, it was almost 7 pm, and I was doing chores and feedings in the barnyard. My mind was focusing on the water-as our pump has a leak somewhere so getting water to everyone requires focus and making sure I turn off various hose zones properly.

And then I went into the pony paddock with Sugee's grain. She was in a corner, wobbly, chewing or mashing her lips, shaking. Her eyes looked panicked. I went to lead her by her shaggy mane-as I always do - to her gated stall. She stumbled, and her hind end was like a drunken sailor. She was acting like she could barely stand and was trying every thing in her power not to go down. While it might have been choke, there was no froth or discharge from her nose or mouth. She is due for another teeth floating, but there had been no hay out all day.

And then she went down.

But she wanted to get up, badly, struggling. I calmed her as best I could. I wanted to call a vet but didn't want to leave her. She somehow got up enough to sit like a dog, and I did all I could to keep her still. I didn't know what I was dealing with so wasn't sure what to do. I've only dealt with a minor colic in the horse once, and moving was the right thing to do then-but this didn't feel like colic, as little as I know. I asked out loud for Martyn to come home, now. She fell down again...I had to leave her.

I ran to the house and called my closest clinic-got the recording and called the emergency vet on call- someone at another clinic I didn't know, and only a recording came on. I needed to talk to someone NOW, not leave a phone recording. I tried to find the number of the woman down the road from our clinic who had originally taken the ponies in and would know the main vet's home number. But her number had changed. I was watching Sugee out my window, some 100 feet away, and she was cast, lifeless looking. I broke down and called one of my other favorite vet's cell numbers and left a panicked message.

I was emotional. I never get emotional-or do my best not to- with my farm vets. They have enough to deal with the animals, and a emotional caretaker is not helpful. But I was so helpless. I really thought she was dying, and was suffering, and I felt helpless. Watching any creature suffer for a length of time is a horrible place to be part of.

I left a panicked message for my vet, and went back to Sugee. My phone couldn't be heard or get coverage out there, but I had to go her. When I got to Sugee, she was still lifeless, and she had cut her interior lip on the last fall. I rested with her, really thinking,

Since she was calmer, I ran back to the house and the vet called at that moment. I was calmer too, and apologetic-of course she was gracious, she is a great vet. We talked it through and of course choke was a possibility, but it could be neurological, or a colic. Soon after Sugee arrived, she stumbled and wobbled like this, not falling, but it was really scary. I know there is a wobbler disease and will have to ask my vet more later. I had Banamine around and I gave her the vet's recommended dosage, to relax the throat /esophagus, and by the time I went back out, she was standing, a bit wobbly, but seemed pretty normal.

This morning she ate well and tonight when I went out to sit with her and take some photos, she seemed normal. She is still very thin, much better than her arrival, but at age 38-40, we do what we can to keep weight on. I will get her regular vet out as soon as she can make it here, to re-evaluate. I want a better emergency plan if it happens again.

Things can change for any of us in a heartbeat. Usually I have some go-to system in the barnyard when an emergency happens. But with equines, it can get pretty hard and complicated. I felt really small and apologized to Sugee, as I didn't have one trick up my sleeve. While I realize I am not a vet, or a magician, It really startled me at how emotional I got. I am sure there are many reasons for this, but not being able to care quickly for something was unsettling. It is part of the package of caring for the elders.

I will learn from this and hopefully do better next time.
Posted by Katherine Dunn/Apifera Farm at 3:16 PM

I'm glad she's doing well now and I hope it is something easily manageable.

I think you did a great job, I would have been fearful too, and desperately trying to reach a vet. I hope your dear Sugee is well.

Here's a hug for you and Sugee! xoxo

Oh hugs for her, I hope she is okay and I would have been freaked out too...sometimes a little knowledge and love is enough. xox

Thanks everyone. I'll be having the vet out soon for another teeth floating. We think it was choke, but, she's so old and was so thin and still is, it could be a lot of things working together in her.

Glad Sugee is okay and you are too. It is so scary, we feel so helpless at these times. I lost my llama who was young (8) and seemingly in perfect health. I'd fed the normal hay (grown here) and went for a little walk, came back and looked at the llamas in the shed and she was acting strangely. Wobbling. Maybe it was choke?! She fell over and was dead in less than 10 minutes. I was stunned. There wasn't time to do anything and I didn't know what to do anyway. She looked a lot like your llama. Her name was Powder. I still miss her.

I'm so sorry Jan- I do think there is often nothing we can do. Nature shows us this- but in the middle of it, we try, or flounder, and suffer as caretakers. I'm sorry about Powder!

....but we care so deeply for our animal friends. so much so, that i hesitate to qualify them as "animals"....because they are my *friends* first and foremost.

i think of you and your little farm, often.
sending you much love and understanding....