The story of the Giant One 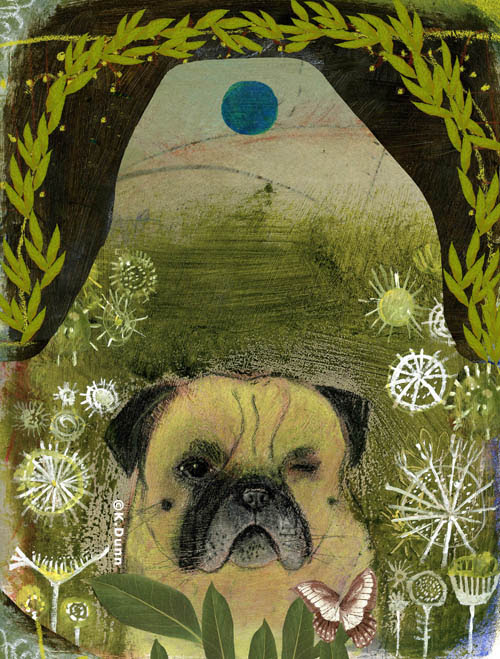 In which Billy Baker the one eyed pug shares a secret of his breed, knowing the audience is open to the many mysteries of the universe, or at least not judgmental. 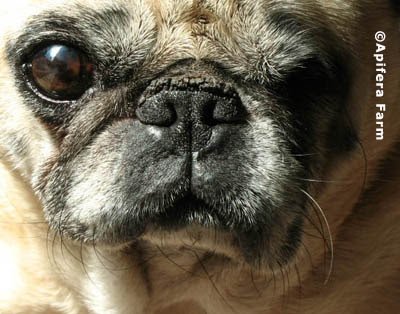 So by the tones of the Two Footer, and all the kisses I was getting, I knew my eyeball was moving onto the Great Place to live amongst stars and other magnificent orbs. This did not worry me. I knew my eyeball would be returning to where it originated, to the Giant One in the night sky. The Two Footers call it a moon, and they say it orchestrates tides of the ocean. The Giant One sends off little eyeballs to all the earthly mother pugs precisely at the time the mother pug gives birth. We pugs don't bother to tell the Two Footers that our eyeballs are born from their moon, because we know they would scoff at it. But I am sharing it here with you, in case you live with a pug, so you can be more respectful of 'full moon' nights. We pugs call it "Giant One Calling" night. For once a month, on the full moon, all pugs instinctively gravitate to the garden, or window seat, and sit amongst the loving shinings of the moon. And for those pugs who have lost an eye, they look up at pride to the night sky, knowing their eyeball is now with the Giant One. It will be nourished by starlight, and in time, it will return to another mother pug, and placed in a young pup to once again see earthly delights.

oh one-eyed pugs out there! i will forever think of you now on the full moon and whenever i do the moon salutation. and coming from eyes that see oddly, i really wonder how YOU see the world out of your one wide fish-bowl globe. please, paint me a picture sometime. xo

ps kd, i love your unhinged mind...thanks for the afternoon storytime! let the stories unfold...

Billy tells a great tale...Mare(soon to be the two footed friend of a chihuahua/pug mix)

Wow, I had know idea how amazing you pugs are. I really admire how you know -a deep in your body knowing- that you are one with the moon. I think I must have some pug in me somewhere, because I too love to watch the light of the full moon sprinkled in the garden.
Thank you dear Pug
Terry

I knew that sweet boy had stories to tell! Thanks for giving him a voice, Katherine.

excellent post...makes me miss our Augie. Pugs are the best.

Dear Billy,
That was a beautiful story. Those of us who have missing parts, by accidents or disease, know that we are special and will be whole again some day.
One of my goats dances on his back legs when there is a full moon. You have given me better understanding of my animals and the "lovely shinings of the moon".
Thank you.