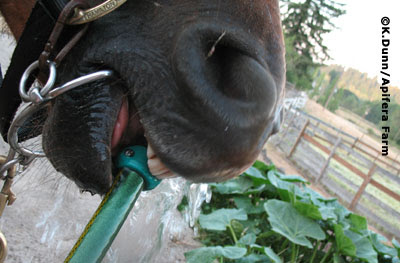 And what is an old farm boy like Boone to do, but hope that the Two Footer With Dirty Nails comes out and gives him some hose therapy.

When it's this hot, I allow a certain amount of whining. Normally, whining on Apifera requires immediate 'go-in-and-wrestle-a-ram-and trim-his-feet' duty...but the mind loses all ability to retain rules, computer passwords or form sentences in this kind of heat. We eat our food raw out of the garden, fearing any cooking inside or out will release even minute quantities of heat.

I have been staying in and doing office duties all week, crammed in my studio with a raggedy AC window unit, dressed in the most raggedy heat wave wear I have. I'm so lucky to have the AC unit, even though it's a piece of crap. I am also allowed to use words like 'crap' in heat waves. My normal Apifera kind and generous tone gets to be a bit roughened. Survival of the fittest requires some frayed edges.

Hose therapy with Boone is quite fun, even in a heat wave. He loves to hold the hose. He also loves to have the water stream shot directly into his mouth. While this might seem like a form of water boarding to some, Boone knickers if you stop. He is the funniest fellow.

The chickens are also getting hose therapy, and they are not as enamored with it. But a chicken panting is a hot chicken. While panting is normal in hot weather, I always fret most about the chickens. So far, no one has died. I must do a chicken post soon and get you up to speed on the many new ladies of Apifera and their lovely underpants.

The animals are so stoic in this heat. Guinnias actually sits out in it late into the day. I think it feels good on his arthritic body. But I make him go in at some point. The goats stay in a lot, and the donks do fine. The ewes are the most stoic of all, nobly doing their job, taking long grazing times in full sun, then retreating, but always going back out. They do not like hose therapy and are conditioned not to need it. The One Eyed Pug is not allowed out until after sun down to protect him from disastor, and even Huck lays around in Labrador daze. Big Tony sleeps on his back in front of a fan, and the other cats are nowhere to be seen most of the day, as they retreat to their many private forested enclaves, known only to a small clan of cats, snakes and unfortunate mice.
Posted by Katherine Dunn/Apifera Farm at 10:21 AM

Email ThisBlogThis!Share to TwitterShare to FacebookShare to Pinterest
Labels: Boone, Life on the farm

Hose therapy sounds like fun to me......I have the crappy window unit as well.....it dries the paint so fast, which can really go either way I guess. Mostly that causes me stress since I'm not a very decisive painter.

Hang in there, before you know it fall will be knocking on our door. Ahhhhhh, those beautiful colors. Warm soup and fresh hot bread.

Sounds like you need an inflatable wading pool for the chickens, pups and hoomins.

Hey Paula- I know, Fall, ah my favorite season. I've actually learned to relish summer more here, since the humidity is nothing like Minnesota. Or the bugs [although we do have skeeters sometimes, and flies]Heat is just so opressive to my wild flower skin, what can I say...Bread and soup, oh to die for...

Cathy- Huck needs a wading pool. I've thought of this. We want to get an outdoor tub for evening tub soaks in summer, under the stars. Of course, there would be bats flying around.

I came home to find three big turkey hens "wading" in the kiddie pool that we use for a duck pond. Let the dogs out from thier daytime quarters and they ran straight to the pool, kicked the turkeys out and luxuriated in the lovely, cool, turkey poop filled water. Ahh the smells of summer!