We lose Emily, but the donkey gives me weeds 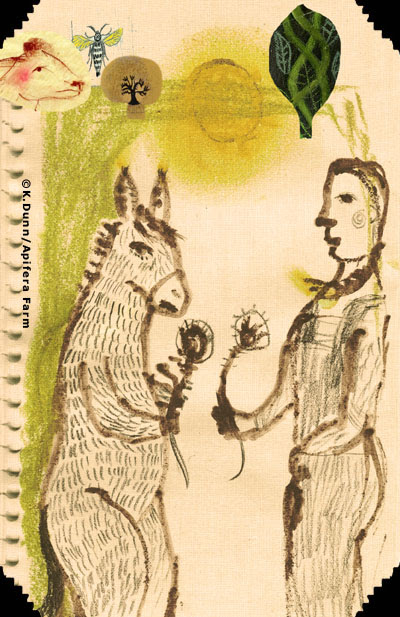 There are some graphic wordings to follow. It's part of life here; if you are a novice shepherd though, you might learn from it.

I buried a sheep today. It was unexpected and shocking. As the vet and I prepared for the necropsy, I saw the donkeys over his shoulder, and Pino was holding a weed in his mouth, as if he was presenting it to me. The fact he then ate it made it no less of an expression of love in my mind.

Her name was Emily Wigley. She would have been one in a month. Fortunately she was not pregnant, as I never breed my pre-yearlings. I named her after a friend of friend, as she just wiggled a lot, and had freckles. Emily just seemed like a name for a freckled face.

I learned so much from the vet's post mortem inspection. The facts were right there in front of me. Nothing would have saved her. We performed the necropsy immediately after her death, out on the compost heap, with Boone looking over his fence, and Frankie standing nearby observing, like a med student.

If you had told me 8 years ago I'd be watching my vet examining my sheep's lungs for pneumonia or cutting open her intestine or liver to discover other death signs, I would have not believed you. But answers are important to moving on after an animal or loved one dies. We want to know, "Why?" As I tended to Emily this morning while she lay in stall, obviously dying, descending into the "death spiral" as my vet calls it, I felt frustrated not knowing exactly what it was. I knew her time was limited, the vet was on the way, and that she was most likely going to be dead soon. Could it be bloat- no, her left side was not that hard. Pneumonia seemed unlikely, but, well, maybe, I thought. I left her for about 20 minutes to go to the house, came back out, and she was gone. I held her head and said my goodbyes, and I asked, "Why?"

As farmers, or people, we often don't get answers we so crave. I was so thankful to get an answer. Her small intestine had an abscess, and when we cut it open, there was massive infection. It could have been a thorn that festered, it could have been a type of worm that overloaded her. We did some tests and the worm load was zip [I felt good about that]. It is not genetic either, a relief. In fact, it was a rare thing to have happen.

Cutting an animal up is a very real experience. It doesn't get much more real than that. I learned I might have saved her if I had known about it maybe a week ago. But we never would have known, how could we? Sometimes, you lose some. I was told that my first year of shepherding. My vet said it again today, with compassion.

I love all things about the farm. If I hated death, how could I love life? One never embraces death, I guess, unless you're struggling to die.
Posted by Katherine Dunn/Apifera Farm at 3:20 PM

Email ThisBlogThis!Share to TwitterShare to FacebookShare to Pinterest
Labels: Life on the farm, Rest in Peace, Sheep of Apifera, Wisdom

Although I agree that without one you can't enjoy the other but it still sucks. I'm sorry, I know you will miss her. Thoughts and prayers.

I'm so sorry to hear this. Sometimes these animals just leave us without warning or goodbyes.
You are a compassionate person who will always struggle with the death of your animals, but as you have experienced, life always ends and they become like the wind....each in it's own way. It is what it is.
I'm so sorry.....

It's a sad fact of life that everything dies. But I totally agree that if you have a flock it's essential to know what caused the death or sickness. I think of things I've had to deal with and see, which were very difficult at the time, but have made me a better farm girl and helps me prepare for the next crisis. Being a farmer is a constant learning process. We have a wonderful vet that is so honest and helpful, I think that's so important!
Hugs
Amber

I also feel responsible when one of
our sheep die. You're a good shepherdess to want to know why and
have courage to find out.

I am so sorry for you loss. I don't think I could ever go through as many losses as you do on a farm. It is so heart-breaking reading about it; I can't imagine living it.

Dear Katherine:
I'm so sorry to hear about your sudden loss. I am so inspired by the attitude you display during such times and how you always use your experiences to grow and become an even more skilled, shepherdess. And the courage you show by sharing your experiences on the blog, will help someone else, someday with their flock and in their lives. Delisa

You've lost several sweeties recently. I am so sorry. I can imagine it never gets easy though it's part of farm life as others have mentioned.

Still, your description of Pino eating his condolence offering made me laugh. Sorry. It's too cute.

Take care. I am sure another sheep sweetie is waiting for your loving rescue.

You've had so many losses lately, I'm sorry, and hope that's the end of it all for a loooong time.

Good morning and thank you for this post and the wonderful heartfelt writing. I sit here shaking my head in understanding and I so feel for you.

I too live on a farm, and the loss of my animals are something I never get use to. My thoughts are with you.