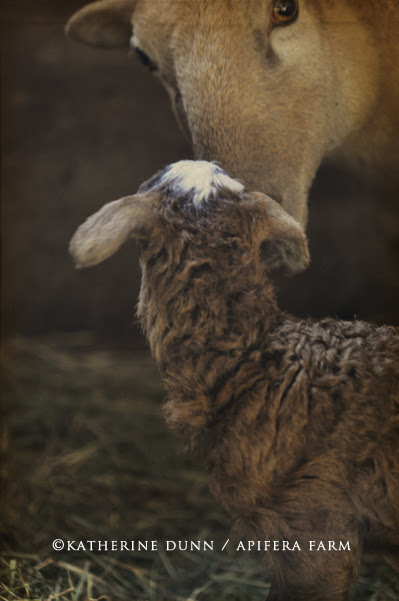 I celebrated my 54th birthday yesterday. It was a day complete with Audrey giving birth to healthy triplets, a huge relief since she was so huge and we figured she was carrying three. Two beautiful boys and a little black-brown girl with a white cap on her head popped out one by one.

I don't usually name ewe lambs until a few weeks, just to make sure they survive but also to get to know them a little bit. But when these triplets were born on my birthday, I immediately thought of my grandmother, Katherine, who died at age 57 two hours before I was born. I was named in her honor, but she went by the nickname "Kappie".

When I saw the little white "cap" on the ewe lamb, I knew her name.

My grandmother was a diabetic and had a stroke, then a heart attack, on a city street in Rochester, MN, waiting to get on a bus. When she collapsed on the sidewalk, my father later learned that initial passersby let her lay there, thinking she was drunk. It haunted him, no doubt. We were living in Rochester while my father, an architect, worked on the Mayo Clinic buildings and my brother had been born the year earlier. There are many pictures of Kappie with my brother and as a child and young teen I looked at her almost as a mythical figure - she had worked as a nurse her entire life and my grandfather - a well known physician and researcher who was responsible for the first writing on High Level Wellness and for each person born to have a social security number - left her for his secretary. My father and his two brothers were only 12 or 14. Back in the 40's, divorce was not as accepted and I'm sure it was a humiliating mark in her life, forever really, since he had a high profile. She went on to work with handicapped children at Shriner's Hospital for years to come.

The day of my birth has become something of legend in the family history. My mother nearly died from bleeding during the delivery and my father had to leave my baby brother with the neighbor he'd never met in order to rush off to claim his mother's body. They experienced the same circle of life and death on March 10, 1958, that we often witness here in the barnyard. After we lost Rosa's twins last week, I'm relieved that both Audrey and Edith have had healthy, normal births. We have four ewes to go.

I don't feel old, whatever that means - but I do have a different perspective on life since entering the mid fifties. It is propelled by the deaths one begins to experience in mid life - parents and relatives, teachers one called a mentor, rock stars who's faces were postered on my childhood wall. Each death brings with it memories of past encounters with a myriad of people and places - this always leads to counting the years.

"It's been 30 years since so and so and I went to the Santana concert? It can't be?"

But it is. Time is really going by and the great mandala is firmly twirling, and I'm on it. I'm happy, content, full of ideas and mainly healthy. So is Martyn. But I don't take it for granted. I wouldn't change my life for any other life I know or any other person's life. I wouldn't take more money if it meant taking on a life that is usually required to make more money. You're not lying in bed with money when your day comes.

I once went to a healer and energy reader and asked her about my grandmother. Did she know I'd been a girl, since she died two hours before my birth.

"Oh yes, she knew. She's fine," said the healer. The healer didn't know anything about her death, but as she continued the reading, she grabbed her chest and said, "She's saying her chest exploded, but it was okay because she's telling me there is so much more." 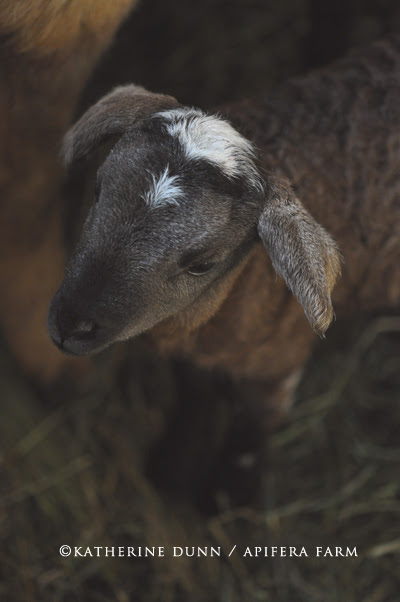 Email ThisBlogThis!Share to TwitterShare to FacebookShare to Pinterest
Labels: Sheep of Apifera, Wisdom

Hi Katherine, Happy Birthday to you. My birthday is the 7th, I knew you were a Pisces. Just wanted to tell you that I love your posts. Although I live a totally different life in the the big city, I can relate to yours and your work with the animals. I especially enjoyed your post regarding your grandmother. Have a wonderful year, and appreciate every moment, and remember all those that have touched your life and in some way made you what you are today. Karen

Katherine... as always your words ring true and clear. Having attended a funeral yesterday, in support of a friend who's brother died much too young... I have been pondering that circle of life... re-affirming the need to live my days with as few regrets as possible and enjoy every moment. Kappie is ADORABLE! Thank you for sharing, dear one.

Happy Birthday. You are an inspiration to me.

Happy Birthday. Your blog is the life I wish I had. I am a Pisces too, born March 13. God bless you!

Hi Katherine,
This post really resonates with me. I'm just a couple of years behind you and my perspective has changed immensely for the very reasons that you speak of. Thank you for speaking your heart.

Happy, Happy Birthday. May your new year be full of blessings and wonders.

Beautiful birthday reflections. How sweet is little Kappie?!? I love the white cap and the star on her forehead.

Happy Birthday!
Hope there was a cake.

Happy Birthday Katherine - a beautiful post. I hope you have a wonderful day.

Names are so powerful. How wonderful to share a name with such a wonderful woman. Hope you had a good birthday. Mine is March 19th and it will be my 8th year spending it with a bunch of girlfriends at the beach. The perfect place for Pisces! Stevie@ruffledfeathewrsandspilledmilk.com

happy belated birthday!!! Thank you for sharing your story, this is a really powerful story! The lamb with the cap ist just soooo cute!