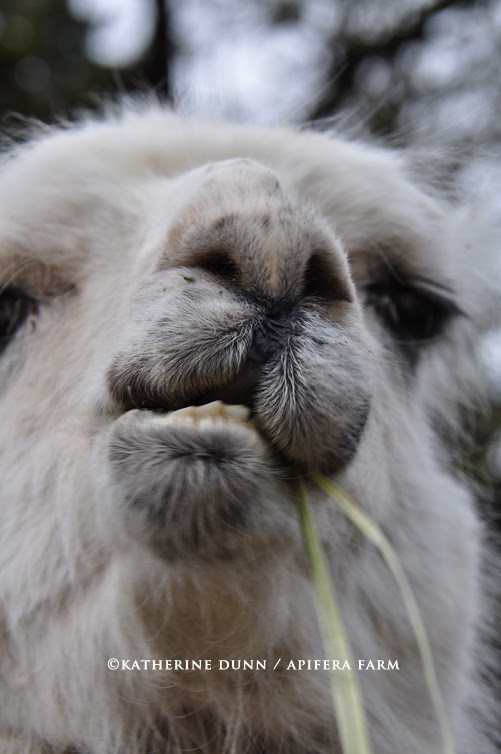 He arrived with the name Kahili, a Hawaiian word that stands for a royal object-a stick with a fluffy thing on the end- that is used in ceremonies. I loved the meaning, but sometimes names don't fit a new life. I always feel like an animal soaks up the name we humans put on them, but inside, they probably have a term for themselves we will never know. Very T.S. Elliott, but I think he was spot on. A name is just one more contraption we humans seem to need for identification, where an animal goes by so much more innate senses like smell.

But, I finally found a name that I feel fits his life here–Aldo–which means "elder". He is also known by Mr. Magnificent, The Great White, Yama. I am really loving Aldo, although at the moment he and the puppy must be separated for safety which makes life a bit more complicated. Aldo and Scooby live in the orchard and seem content as clams.

When he arrived, I wanted to just examine every inch of him. I'd never seen llama feet. Oddest things, but then I guess they are odd only because I've never seen them. He walks very precisely and sort of in a feminine way. His lips are wonderful as is the one black eyebrow. Aldo gets that I am now the Feeder. He comes to me for breakfast and dinner and eats out of my hand if I have the time. When he eats, I pet him, and touch his eyes and face to tender him a bit. He has calmed since his arrival, when he spent the first day humming out of anxiety. I know llamas are not really prone to want lots of touching, but I need to be able to handle him. Within his short month here, we have made progress. And recently, I kissed him gently on his eyebrow, and whispered something in his ear. It is between him and me, but was a covenant of sorts.

I never would have sought out an elderly llama, but since I wanted to adopt Scooby Keith, I got the bonus of an elder llama. Sometimes things just work out for the better without even trying. 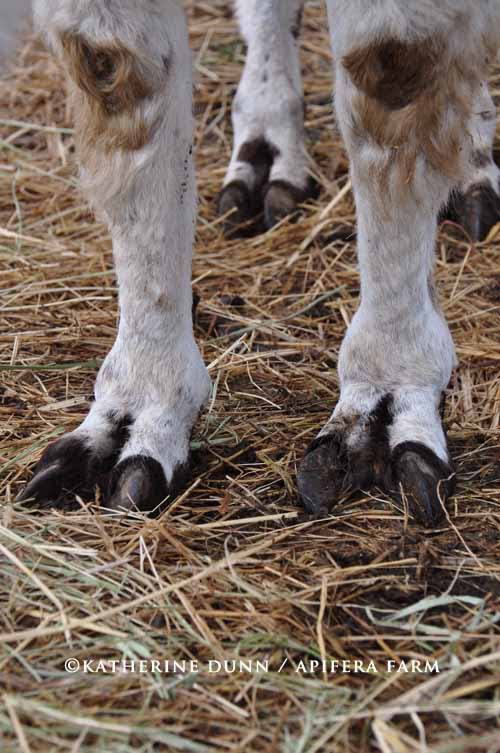 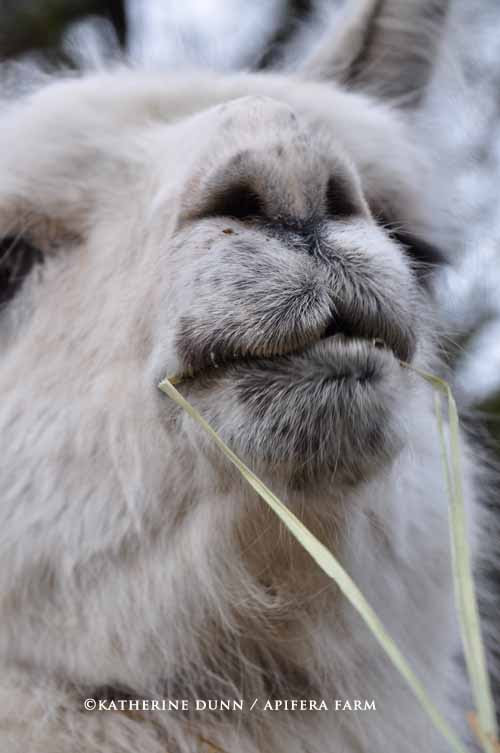 Posted by Katherine Dunn/Apifera Farm at 11:47 AM

Oh those are odd feet, but of course, not odd to Aldo. He is a charmer and that is nice he is settling in.

He is lovely, but actually, even for llamas, his feet are oddish. From what I can see, he's down on his pasturns. It's not the end of the world, but it probably indicates arthritis. (Normal for this) I have several with this issue. You can add glucosamine to his food (a horse supplement would be fine), and, if it gets painful or in the winter when the cold exacerbates the issue, you can add powdered aspirin. Llamas are wonderful, and I hope you enjoy him as much as I enjoy mine!

If you have any questions about these strange creatures, feel free to contact me. I've been working with them for 14 years now.

He has arthritis in one front leg, not sure how long.