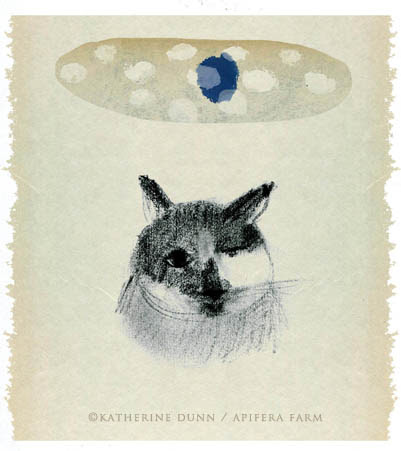 This story started yesterday, when I saw a post on Facebook alerting people in the Oregon area that there was a semi feral tomcat in need. The woman posting about it had tried the no-kill shelters, but they turned her down. Now normally I don't get pulled into animal neglect drama on Facebook, and I really didn't know this woman at all, she was one of many of my "friends" that come and go in news feeds [as I come and go in theirs too]. But, I told her if she could bring him to the farm, I'd take him in. It turned out she lived 1.5 hours away. But she was willing to do it. I said he'd have to go to the vet first to be tested, and she was going to do that too.

But in some quick exchanges, she opted to bring him up right away, and the vet wouldn't work out for some reason. Well, then I said she could meet me at my vet's and I'd leave him there the night and he could be tested and then neutered.

I have never brought a cat onto this farm-except for Itty who I found on a highway, and Peach who was dumped at my vet's. I certainly haven't gone looking for one on Facebook, an hour and a half away.

But when the final arrangements were made, I felt there was some reason I needed to do this and help both cat and woman. She said it had taken her 2 years to trap him, and that she had dogs that hated cats so it wouldn't work at her house. And her neighbors had dogs that attacked cats. I listened, but it was something internal that just told me not to question anything.

I got to the vet clinic and the thanked the woman for driving him up. We checked in at the front desk and when asked what his name was, I said, "For now, "Cat"". I didn't want to rush into naming him. We got the large dog crate he was in into an exam room, took him out and placed him into another small crate without any trouble. The woman could be on her way. She had a meeting to get back to at 6 and a long drive. It was good of her to trap the cat and bring him up.

I was told he was semi feral. He sure looked the part. Testicals the size of walnuts, which gave him extremely puffy cheeks and jowls. In our exchanges, the woman had thought he was swollen, but it was all testosterone. I was led to believe he was pretty much going to run off out of the cage, but we got him out and he sat quietly on the exam table. The vet and I first did a blood draw to determine if he had feline AIDS or leukemia. Both would not be good.

So while I waited for blood results, I got to know "Cat". He reminded me of Phinnias T. Barnum in personality, and Bradshaw and BW in looks and posture with his beautiful black and white markings and a jet black nose and chin. He was loaded with lice and had scars and cat bites [or other critters, who knows] all over him. He was thin but had been eating for sure and did weigh in at 12 pounds. His upper front teeth were gone and is incisors were broken off-probably meshed into another cat somewhere. His eye was puffy and full of goop and glassy, like he had a wound there. He definatly had been living the life of a Tom.

But he was a lover. He let me hold him, pick him up, caress him with my face-somewhere along the line he had understood love. He didn't balk at the blood draw. We could open his mouth and check all his body over.

I felt an instant bonding pretty soon after being with him -and when the vet went out to do the blood results, it was just the Cat and me in that room. I liked him. It was that quick with him.

And then the vet came back with results.

There was one choice to make and we knew it. I don't know why all this happened the way it did. I guess someone could have taken him to a vet down where he was trapped and he could have left his realm down there. I really believe for some reason it had to work out like this - that someone would take the time to drive him up, and I somehow knew the only way to handle it was to take him immediately into the vet before landing at Apifera [I figured I could have crated him for another night, but my gut said to meet the woman at the vet].

I'm no hero, none of us were-but it was a very spiritual one hour. I went from my car into the vet clinic to help an unknown cat, and within the hour got to know him, understand the gravity of his condition, understood the fate I would seal for him. While the vet prepared the sedative and cocktail, I spent more time with him and told him all sorts of good stories about his next adventure.

"There will be birds to eat, but they will immediately come back to life. You will be able to do anything in spirit there, anything. There will never be another night of fights, or fear of flight. You'll never be hungry and you won't itch. You are a magnificent cat. I'm so glad I got to have this hour with you. Can you look for me later on?"

He would not die alone, wouldn't infect other cats and he wouldn't suffer in illness or half dead on a roadside. Before we gave him the sedative, I told my vet I wanted to name him.

So there on the table, I christened him "Charles III".

He dosed off, and then he was gone.

It was strange. It was only one hour, but I felt we were meant to be together-even for sixty minutes.

Email ThisBlogThis!Share to TwitterShare to FacebookShare to Pinterest
Labels: Cats of Apifera, Rest in Peace, Wisdom

Oh Katherine, how magical that you crossed his path, to help ease his way. You're so kind and brave. RIP, Charles.

This is one of the loveliest things you've written.

Oh my God Katherine...I believe you are absolutely correct about the Universe putting you in the right place to care for this cat, who was so unloved and un-cared for. Thank you, dear, sweet woman for taking on this difficult responsibility and giving peace and love to this creature.

You are such a lovely person. Thank you for all that you did for this homeless cat.

So sad but so sweet and kind of you. I wish it had turned out differently. I hate waiting for test results on stray kitties. I have had this happen before where I took what was an animal with a will to live into the vet, found out they had feline leukemia, and had to make the choice you did. Yes, it happened for a reason, I'm sure.

I spent a lot of time thinking about this story last night after reading it. Thank you for sharing it!

I had a feeling you would make me cry this morning. But you warmed my heart too. Thank you for loving the animals.

He went on to his next life with dignity and some love from your arms. xox

Thank you sweet friend to all, may God bless you and all you love.
Happy trails Charles 111.
Susie in Fl

Thank you so much for helping this cat; as I help lots of cats too and some of the stories are very sad, I feel for you.

Katherine,
Thank you for giving him a decent ending and love in his final hours. Thank you for having a heart and responding to that woman request on facebook. Thank you for your generosity and humanity.

And yes, you are a hero, at least to me. God bless you and your loved ones. Amen.

bless you for helping this cat.
happy trails, charles III.