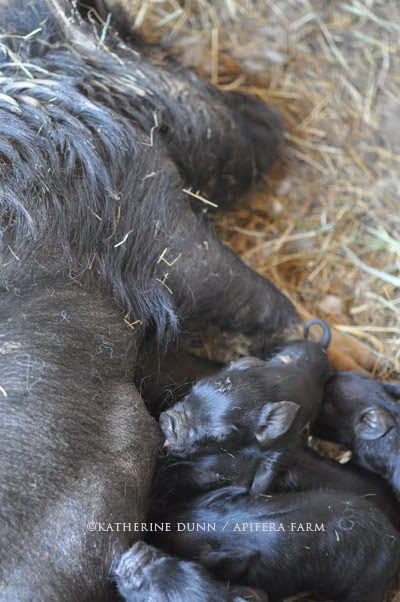 The proper term is farrowing, but I always forget how to say it, so I began saying "pigletting", which I think is a much better term.

And as you can see, we have pigletted! I rose at 7 am to beat the heat and went on a ride with Boone, our first in over seven days due to the temperatures. It was a wonderful ride, and stayed cool. Upon arriving back at the farm, it was the usual suspects lying around chewing cud or bathing in mud pools.

I went down to fill water buckets in the lower paddocks, and saw the pigs, Doris and June, lying together in the shade. Nothing strange about that. I got a little closer to check on Pearly June's privates, as they had swollen up a few days ago and I assumed she was close to farrowing time. I'm new at this, remember. And there they were, two little feet coming out.

She hadn't even made a nest to birth in. And she of course was in the paddock, not the pen I had envisioned her in. Now if these were my sheep this wouldn't have happened this way, as I know to the date when they will lamb and they come into lambing stalls at night and then out into the paddock during the day. I have two areas for the pigs for pigletting, but, things are a bit chaotic. Unlike sheep, who give me clearer signs, pigs don't seem to. My pig friend who has been raising pigs for some time said they basically start digging around looking for bedding to make a nest and boom, piglets pop out. So that's about what happened.

Thank goodness she didn't do it in the wallow.

So she popped the piglet out and then she starts casually roaming around, leaving the baby in the dust. Oy. She goes into the duck hut, a perfect place to have pigs I might add, but Stevie has taken it over during the heat wave, and then in came Doris, and Pearly June got very upset. I had brought the piglet over to her, telling her to take care of this baby. At least she showed she didn't want Doris around, good mothering.

After much chaos-I admit here, I was not calm, and I regret this-the last thing any birthing mother needs be it pig, sheep or woman- is someone in a huff trying to get things reordered. But I wanted her to get in this other paddock which had the intended pigletting palace.

Nope. She didn't want that pigletting palace she wanted to be in the hut she first knew when she got here a year ago.

Fair enough. I got the piglet in with her and got a fair amount of hay for bedding, but not too much as the babies can get buried in them. Meanwhile the piglet felt cold, even though it was about 85 degrees. I ran into call my pig friend - I love that I have pig friends - and asked her some more advice. Besides, I wanted to give the Pearly June time on her own, away from ME, the screaming pig tender. Unlike lambs who need mother's milk within two hours, piglets can go quite a long time. She suggested I lay him in a box in the sun, while Pearl got her pigletting going. She had sows that birthed the whole litter and then hours later, they milked.

So about 40 minutes after settling her into her hut, with one piglet, I went out to check on her and she had 5 more. Wow! That was one quick pigletting! In fact the final piglet had jut come out and was a real whopper, with white front feet like her mom. They are all black, which is sort of disappointing as we wondered if we would get some Kune color in there. But that is okay, they are alive. There is one teeny runt, but within time he was up there grabbing teats like anyone else.

Tonight I will hope nobody gets crushed. I've been told to prepare myself for this fact. When Martyn gets home, I might try to move her to the intended stall I had for pigletting, as she needs to be separate from Doris for a few days at least. But I might opt to let her stay in her hut. I will need to put up a temporary wood wall to keep them in at night. I covered the swimming hole but that is a long ways off, they aren't going to be walking over there today anyway. 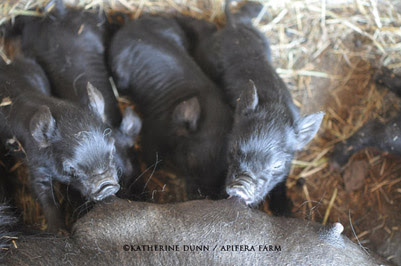 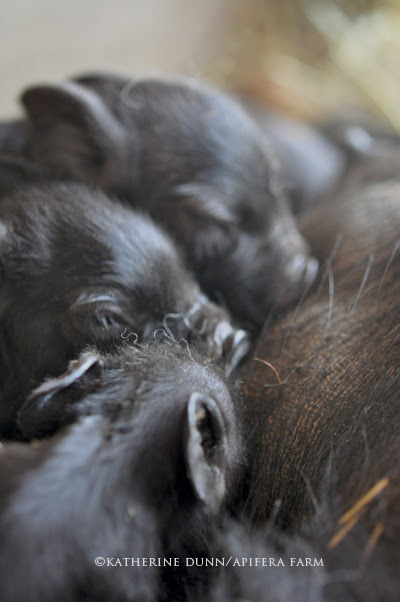 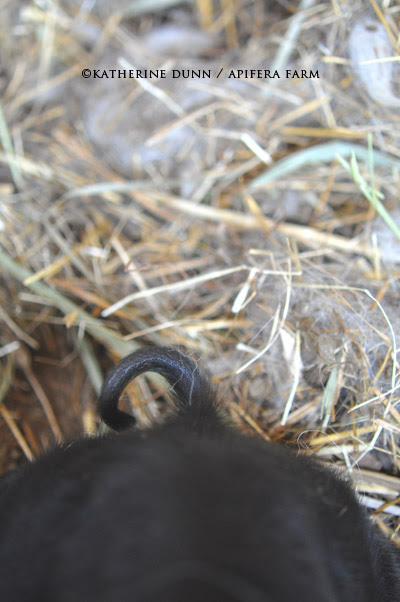 Email ThisBlogThis!Share to TwitterShare to FacebookShare to Pinterest
Labels: Life on the farm, Pearly June, Pigs

They are so darling! Congrats :)

Piggies are so cute!

so sweet! nothing cuter than a tiny pig!

Beyond adorable! Congratulations to mama, babies, proud papa and the pig tender. Well done, all.