Ernest gets a banana 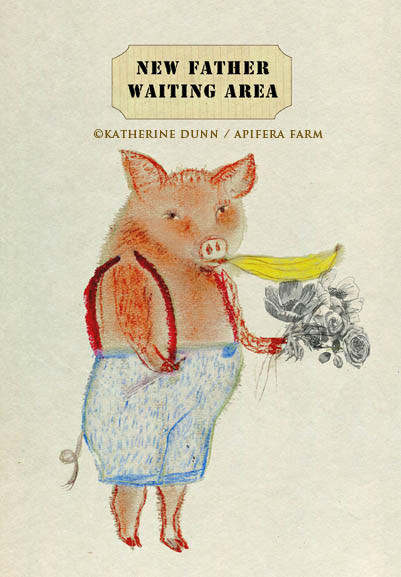 I heard the recognizable foot steps scurry to the studio's front door. Then a brief knock, rap-rap. It was always two raps, and I was told if it was ever more than two raps I would know it was an imposter. But two raps meant it was The Head Troll.

A note slipped under the door, and it simply stated:

Need a banana for Ernest

Well, since this seemed harmless, I started to the kitchen where it so happened I had just brought home new bananas. I returned with a yellow fruit for The Head Troll and watched her disappear to the barnyard.

I got on with my work, but another two raps came shortly after. Another note slipped under the door:

Can you press Earnest's dress shorts for him?

I peered outside the door and the goat stood holding Earnest's linen shorts.

Of course I knew something was up, so after ironing the shorts, investigated.

I have told the animals there is no smoking of any kind on this land. But a first time father needs something to mark the occasion of his new litter, and if you can't smoke a cigar, may as well hold a banana in your mouth for a bit. All morning, Earnest has been pressed up against the paddock that holds Doris, who is waiting to piglet. Some 15 feet away, he can see the mother of his new children, Pearly June. It is so like him to dress up for the occasion and look his best for the mothers. Earnest is a true gentleman.

An hour later I found a banana peel and Earnest was once again naked, sunning in wet dirt.
Posted by Katherine Dunn/Apifera Farm at 4:13 PM