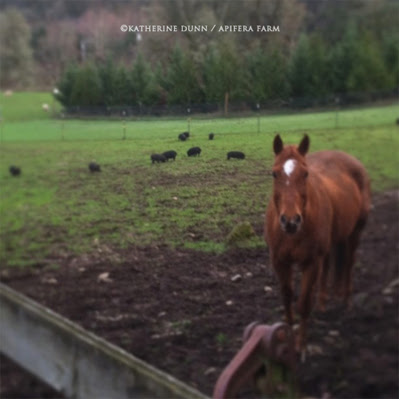 I love pigs. I have learned a lot about piglets in the past few months. They are cute. They are active. They scream. They remind me of rats. They do things in packs-including surrounding your feet while you try to walk with feed buckets screaming the entire time. Their noses are as powerful as an adult.

I'm not sure I'm cut out for pigletting. We shall see. I can't see a life without one or two, especially my dear Earnest, or Eleanor. I love Earnest as much as the sunset. Earnest is charming, low key and besides having the capacity to take down a couple gates when I'm doing morning and nightly feedings, he has posed no trouble. He lets me sit on him and hold him. Eleanor is a real talker, a non stop talker. She has warmed up a lot since I started keeping her in main barnyard. She was not as social as Earnest for some reason, but she is a sweet girl. But man, don't try to get a word in edgewise with that pig!

The part of pigletting [again, I'm aware this is not a word, but it is my word, much more interesting than farrowing, I think] that I find the most difficult, and worrisome in the long run, is what they have the capability to do to the land. If you travel out in the country and see a farm with a few pigs in even a large area/pen, it will most likely be eaten down, and muddy depending on the time of year. I had imagined letting my pigs graze all the time, but if I want to keep certain fields intact, I can't do this. The pigs are rooting a lot.

Note to all pig-owner-wannabes: I don't care what some people say, but pigs root. There is this myth amongst certain KuneKune breeders, and Guinea Hog people [not all, just some] that they don't root.

Depending on the time of year, they do root, and some seem more prone to it than others-something my friend and Berkshire pig raiser agrees with. In spring, they just love going for worms and grubs. If there is lots of ample grass-good grass with nutrition, they don't root as much. But put them in a low cropped field in winter and they will root something. My two Guinea sows like to root where the llama poops. This is good and bad. Good because the llama poops in one spot generally, and it covers about 5' of space. It's always in the middle of the field, far form compost areas, so the pigs have rooted and turned the soil for me. Along with the roots, of course. We've been meaning to reseed that pasture anyway.

Another myth is that Guinea Hogs don't need supplemental food. Big myth. If you live in a climate that always has fresh forage, with nutrition in it- great, no supplement. Especially if you aren't breeding. These guys can get fat fast and that's not good. But they need supplemental food. The Guinea Hog was the old backyard pig before producers started breeding pigs to be bigger and longer, then people started buying food from large farms, then large factories. So the original Guinea Hogs, that almost went extinct, were back yard scrappers.

I didn't breed sheep this year because I wanted to see what raising the piglets was like, and how it effects my cross pasturing. I'm glad I did that. The piglets have a huge dry area but now in the day they run in Boone's paddock. They will defiantly rid it of dog fennel, which is good, as nobody eats it and Boone's pasture is the last to still have it. Boone gets along fine with them, so far.

Piglets are cute. People see the photos and ooh and ah. But like any livestock, there is a lot of work they don't consider. I have spent so many hours, most weekends, fixing fences, securing better boards at the bottom of fences to keep pigs in, creating dry areas for feeding that they don't destroy with their noses. You turn around and something changes-it's just part of farming. I can not imagine having a huge pig operation-it would take some special fencing.

Now, I'm not trying to poo-poo [sorry for the pun] pig breeding, or ownership. They are lots of fun, if you have the right fencing, and the patience to always be working on fencing. They are not pasture ornaments [but then, what animal is?].

To balance this post out- I would never exchange the experience of breeding some pigs and rearing these fellows up. But I do think I might want to stay with one species for breeding. The cross pasturing, and keeping breeders and non breeders separate becomes much more problematic with pigs, even with my gentle Little Big man, Earnest. 22 acres seems like a lot to some people, but to rotate pastures with a working flock, and keep rams in another working paddock, and donkeys, and one horse-and keep it all healthy, takes some work. Adding pigs intot he mix really works the land overtime. 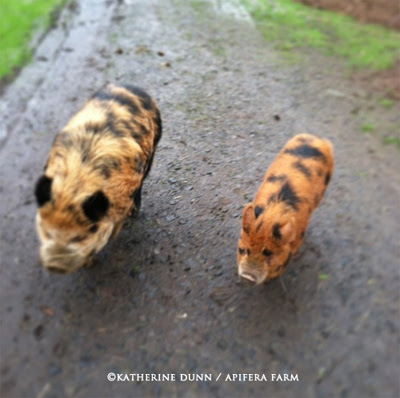 Email ThisBlogThis!Share to TwitterShare to FacebookShare to Pinterest
Labels: Life on the farm, Pigs

Pastured pigs are hard on the land this time of year, for sure, unless you have the space and adequate fencing to rotate regularly. Everyone I knew who experimented with breeding a sow or two gave up the endeavor. I always purchased weaners in the late spring and butchered in the fall for that reason--plus fall was when my milkers were tapering off (the pigs got all the surplus), the garden was spent, the pens were getting muddy, and I was tired of carrying a pigstick (a piece of 2x4) in case I needed to protect myself from the aggressively hungry 220 lb.+ hogs at feeding time. When it was time to start the cycle over, the pens had rested and regrown.

Thanks for your input, Gus-Pat. I bet you're thinking, "Why did she breed to farrow in August for winter management?" I ws so on the fence about adding piglets into the farm mix, but then was encouraged to do it sooner than later as gilts can go sterile I guess if not bred at east 1x a year. So I know the timing wasn't optimum. I actually have other pastures, but with the sheep rotating, don't want them there. WOuld love to put them up in the hills where the oaks are but, too risky and they'd probably go ferel overnight! I don't have to caryy a stick, but I get it! When I go to my friend's that has Bershires, man, they are big, and you get them swarming....gotta protect your boundary, I get it.I know the grass will grow, and I guess I'd be fretting about fields no matter what this time of year witht he slop and mud...

They are most adorable, but I am glad they are yours. A friend got a miniature pig and it roots too. And screams bloody all get out. No pigs for me. Barking dogs is enough. xox

Corrine-which is why so many end up in shelters-I refuse to breed pigs for pets. While they definatly have domesticated abilties-they belong in a well managed barnyard, not the house. My vet has many good pet pig horror stories.People see the piglet photos and some actually buy into the entire 'micro' pig bologna. Did I spell that right?

YOu are so right. This gal got the pig and even though it will top out at 45 lbs, it's a terror and not behaved and is now living outside in a playpen on a porch at night. (Warm climate, but still, not so good I think). Farm animals belong on farms and not as pets. I cannot imagine myself and this tiny thing was a handful and a half. Micro pig bologna indeed. xox