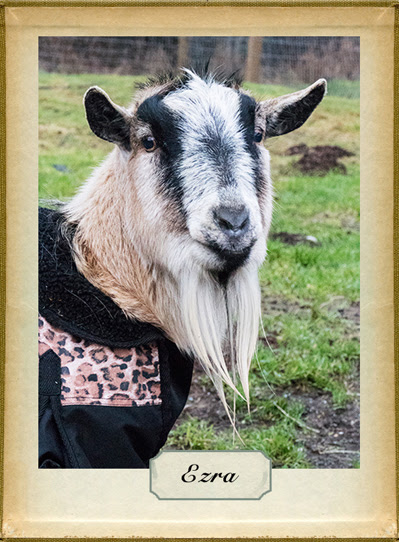 Please consider making a small donation to help offset expenses to bring home our new Misfit. There are reward levels for those interested.

When I saw this story I immediately knew I had to take on one of these elders. And we'll be making the 12 hour drive to pick up this crippled little fellow. I asked Martyn if he might be p for a drive, not telling him to where, and he said "Sure". Even after telling him it was the familiar 12 hour round trip north to get an old goat, he didn't bat an eye. Sainthood must be next.

I immediately liked the name, Ezra, and looked up the meaning. I felt a lump in my throat. Of Hebrew orgin, the name means "help". It was like he was reaching out all along, and was finally heard. It's also the name of the poet, Ezra Pound, and you all know we already have a poet in our midst, so I think having another is a worthy addition.

Ezra is over ten. He was part of a small herd of Pygmies that were relinquished to New Moon Goat Farm Rescue up in Washington {this will be the 15th goat we have taken from them!} . The entire herd of elders was very malnourished, lice ridden, on their knees from foot issues, and most are arthritic and crippled from the neglect. When New Moon was called to take the goats, she went immediately, but two were laying dead in the paddocks, malnourished. She got the herd of six remaining goats to her farm, and I had my mind made up to take the worse off goat, but he died within the week. But as Ellen said, he died in a warm barn, being cared for–she and I have often discussed how a goat like this can get to a place they feel comfortable and safe, and they let go. This is a gift for them and it is part of taking these old ones on-you know they might not make it, but you also know you are helping give them a safe place, to either let go, or thrive for some more months or years. So I hope we get him in time to help nourish him-no matter what, we'll do our best for him.

Ezra is said to be a sweet tempered little fellow, very arthritic and crippled, but gets around okay. I thought he might be a good pal for Scooby Keith. It is very cold out and will continue to be cold until next week-but it is dry. I've seen it repeatedly where a malnourished elder arrives, it turns cold, and they don't have much resistance–sometimes they don't come out of it.

He will be a spirit guide for you flock. Don't be surprised if he starts speaking some poetry himself. Glad to help. From my Ezra to yours. xox

Corrine, the story about your grandfather, Ezra- oh! I swelled up! I hope it's ok if I share that on FB? I love how those we love, many gone, still are conduits to the living, even if an old goat.

Ezra is looking forward to a nice place to live, with you. Bless your hearts for making the 12 hour drive and the place in your hearts.