Funeral for The Head Troll 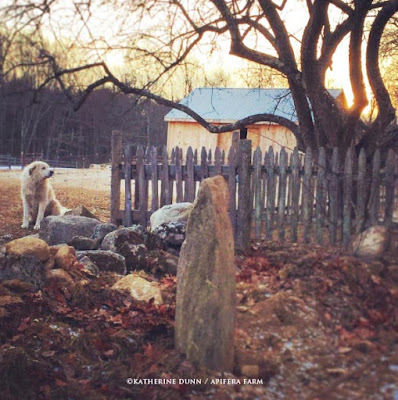 As requested, the barnyard asked me to transcribe the funeral of The Head Troll, without any interference of photos.

I heard foot steps rushing to the front door.

My heart nearly stopped. It couldn't be her. But it was the sound I had heard so many times, of The Head Troll, scurrying to slip a note under my door, and then rushing back to the barn for whatever duties she had that day.

The footsteps were slower, heavier. And the note was pushed under the door as the footsteps retreated to the barn.

I picked up the note, crudely written,

Bring the ukulele? 6 am meet at the picket gate

Oh good Lord, six am? Well, they are early risers and it is a beautiful time of day, with the morning light sneaking in as darkness lifts.

So there we all were this morning, at the picket gate, huddled together. We are in the middle of a three day cold snap and I remind myself that soon I'll be whining about flies.

Paco appeared from the barn. My heart nearly cracked. He had some how found the old horse blanket I had draped over The Head Troll as she lay dying. He walked as only Paco can, in a slow shuffle, his head down, much like Eeorye, his tail making a swish every few steps. Around his neck, he had the special necklace I had crudely made out of one of The Head Troll's broken horns years back-a horn that fell off after she got herself stuck, for the thirtieth time, in fencing-as she tried to engage her mouth in grass on the other side of that fence as it must have appeared much better to her than the grass on her side.

Nobody spoke. The goats chewed cud, a sign of solidarity I thought.

We walked the short distance to the gravesite. Frankie had been buried the day before, out of necessity. Martyn had found a beautiful stone spire and placed it as her monument-we can see it from the house and it is so fitting to her, a strong stone pointing upwards-no hill was too tall for Frankie.

"We are here this morning to salute The Head Troll, a goat of small size but remarkable strength. I was with her longer than any of you. I knew her when she had no purpose, I had no purpose. But I watched her over the years, and I admired the way she could get things done, without ego, without complaint. And boy, when she told all of us to line up, we lined up!"

The entire group cheered, "So true! So true!"

"So let us now honor her, and line up according to our heights, smallest first over on the right," Paco declared.

And they did. Well, there is always some confusion with Earnest and Moose, so Moose stood in front of Earnest.

"I have written a poem for this occasion," said Paco, and he began to read.

As I looked to the sky this morn,


I saw five birds, tussling to perch on the wire.


And I did not cry for you.

They flitted around,
and then perched in a tidy row, side by side,
and then they whistled a tune.

And I did not cry for you.

Because you taught me, once long ago,
that when I'm scared, whistle.
You told me it vibrates the heart
and the blood moving around warms the
perspective of a fearful glance.

And I did not cry for you.
I whistled with the birds.


And then he began to whistle, "Che too madre" from Madame Butterfly. The funeral procession did their best to whistle Puccini and I made an honorable effort to play the ukulele in a fitting operatic way. One by one, the funeral party dispersed, heading back to the barn, leaving me and Paco standing at that grave.

Paco turned to me and he carefully, and so gently, wrapped the horse blanket around my shoulders and placed the necklace with Frankie's horn around my neck. We left the scene without a word.

Email ThisBlogThis!Share to TwitterShare to FacebookShare to Pinterest
Labels: Old goats of Apifera, Paco the Poet, The Head Troll

What a perfect way to honor and remember our fallen friend. Lovely, Katherine.

The Head Troll's funeral was the epitome of love and respect. Thanks for sharing it. I will thinking of you in the coming days.

your recounting of this touching scene is a fitting end to a life well lived. very sweet and well said. hugs to you and everyone in the barn.

So beautiful ... well done sweet Paco. We can only hope for such a poetic and loving tribute when our turn comes. Thinking of you all as the weather turns yet again ... xoxo