Rosie freaks me out and Little Lonely hanging in there 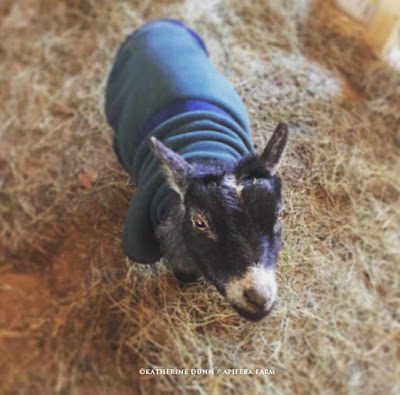 Last night I had a scare with Rosie, the goat Rosie not to be confused with the pig Rosie  {I have not told the pig there is another Rosie, I think it will only irritate her. How could there be more than one me? she'd ask.}

Rosie had just finished dinner-I have her on a bit of grain as she is a bit thin-and she got choke. If  you've experienced watching a goat with choke it's horrible. You feel pretty helpless. I've never had one die of choke, and typically they pull out of it, but it is so scary to witness, and the first time you do you think it is all over. It happens when a goat eats to fast, which can be compounded when they eat in a group. They toss their heads in distress as they can't breathe, and they foam and shake their heads, some cry out as Rosie did - good sign really. And Rosie would jump up and around trying to expel the choke. Some people misdiagnose this when they see the froth as frothy bloat, fyi.

Some people put rocks in their dishes to slow them down-that never worked for me. So I massaged her throat, got water down her and then did drum beats on her sides. I've never had a goat take so long to work herself out of it though. Of course it was night, and it was one of the chillier nights so there I was sitting with a goat, and of course Opie was trying to help. I finally went into give her some time to relax, as all the commotion can make them even tenser. She was breathing, she just could not expel what she needed to. When I returned she was much calmer, and I knew she was going to be ok, but she still had some fits. I was so relieved she worked herself, finally, out of it. No more grain for her for awhile and I will start to mash is in water I think.

Little Lonely is hanging in there. I have shied from constantly taking pics of him, but I will this week. I think he is getting enough milk, and Cornelia's bags are fill [some anyway] so i think he's milking well. He seems strong, in fact he's downright feisty when I work with him. Bugger even gave me a bite already. Pigs get teeth fast, and they are sharp. I tried to supplement with a bottle but he just refuses, but i think because he is getting enough at the mama milk bar, right now anyway, it is okay.

I'm pretty beat. Please forgive me if these past couple of posts wreak of exhaustion. I am determined to be back in the studio tomorrow and all month focus on painting, now that my little Spoken Word memoir is done-which by the way, NOBODY has purchased. I'm crushed! It is the sweetest story. Perhaps people don't think a frisbee has any insights-this frisbee does!

You know when I was a kid I always said "I'll do it by myself." It irritated my mother no end. As an only child she was really into molding me...and fussing around me and my children when we visited and one was sick. As I look back it is a sweet remembrance. It was sure irritating at the time!
Your kids are OK. Their trials and independence taking care of themselves is a gift to each of you.
Christie