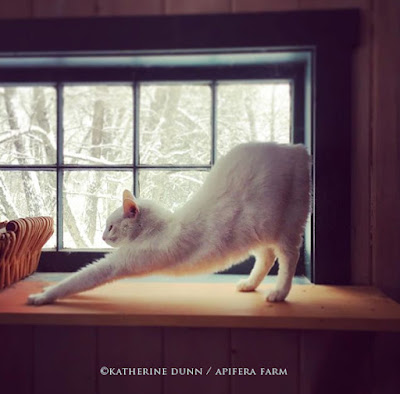 The cat is a wonderful creature. I have always admired them for their combination of survival skills: the ability to appreciate zen over stress, finding food and shelter when needed, and taking full advantage of their body's grace to keep themselves limber, even as they age.

A reminder for us all, including myself-keep stretching, use it or lose-or don't use it and feel your muscles tense up.

I still do yoga each morning, although it's dwindled down to about 10 minutes. But when I don't for even a couple days, I can feel it in my lower back.

I'm noticing my age more and more as I near sixty. I don't want to turn this blog into a space of ailments, but I'm somewhat frustrated by certain things that have been happening in my body since about 56. When I find myself getting depressed about it, I push it away, because there are are so many other things that could be wrong, and aren't. I've lost two people to cancer, my age, this past month. I see friends fighting all sorts of debilitating diseases-having a fatter middle is nothing compared to that.

I watch the elder cats stretch and jump, sit and sleep, focused on a light beam, a window of snow flakes...or a dish of food being consumed by a fellow cat-they do it all with a balance of intrigue and calm. I doubt they are noticing the fact their tummies have dropped-or that mine is a certain size. I found this an annoying thing to go through-the frustration of putting on post menopause weight after working hard to maintain a good weight through my adult years. I've never been one to diet, I love food-good food fortunately. So when I put on some weight in my early thirties, I went to Weight Watchers. They weren't going to let me in because I was one pound under the limit. But they did. I'm sure when I walked in the group that was there-mainly people older than 55, and mainly people with a lot more weight to lose than my wimpy 12 pounds-but I went every week and listened. I've thought of this one man a lot as I struggle with weight in the last few years. He was a sweet, quiet man, probably about 65. Every week, the leader would end the session with asking people if they had 'special challenges' that week that might trigger over eating. This fellow would always quietly say, just two words,

Every week, he looked the same to me. And there I was whipping off my weight 1-2 pounds a week. Oh to have hormones and be young again.

I never gained it back...until one day, I hit my fifties. I was active, I ate well, I knew how to take it off. But this time it didn't come off. It brought on angst because when I was little, someone I loved very much patted me on the belly and told me I was "too young to be fat." Of course, I was not fat, I was just a little 8 year old that had a slight paunch. But it crushed me. And I know my angst about not being able to lose the tire around my middle is tied up into that, or partially is.

I don't like having this tire to carry around. But...I walk with Muddy, eat right and my attitude is that what is most important is strength, breath, and life. I don't want to die wishing I'd eaten more olives. And if you think about it, we would never look back at being ten and think, "I wish I had that waist again," why do some of us think we should aspire to the waist and neckline of our early forties. I just never thought my middle would get to this. It's just sort of a little cloud that is behind my head all the time. I can look the other way and the beautiful blue sky, or acknowledge it from time to time, quickly, and focus on my breath and life.

I always thought I had it under control. But I don't, my body is just doing what it is programmed to do via my particular DNA and no matter how many calories I count out the tire will be there. Can it get smaller? Yea, but the last time I tried that I was eating 1000 calories a day. What a drag. The same calories that maintain weight for me at 40-50, well, now it means eating so little to lose 1/4 pound. I want to eat...I don't know, God forbid, 1500 calories a day at least.

Eye floaters, the loss of my perfect blood pressure from my entire adult life until menopause...carpel tunnel, the known fact that when I trip in the barn it might take months to heal instead of weeks...it's all part of the package of getting older. But the package is also about breath, and life, and the fact some of us still get to be here in relatively good health. I like what I heard an elder woman say about her body, she had been a modern dancer her entire life, but at 90 still loved to dance, and did. Her arms were sagging and her muscles had deteriorated, but she still moved gracefully about the floor, and she said she thinks of her body now as a 'body of breath." I liked that, I am going to focus on acknowledging I am a body of breath. 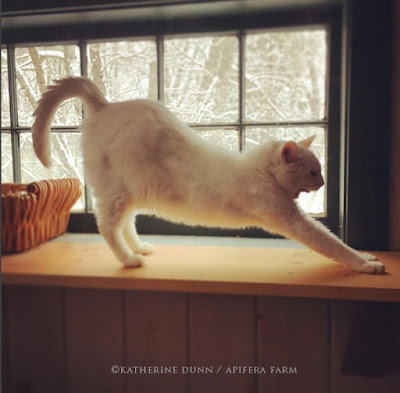 It's very comforting to know others struggle with a change of size as they age. 61 means eating way less and gaining way more. i mean, how little can one eat and still gain weight? it's crazy. i was always known as the skinny one. i ate everything but the kitchen sink and never gained weight. i wanted to gain. then i hit 50. everything changed and continues to change at 61. my mother is 87. most of her friends are shrinking at an alarming rate. not her. she asked recently when i thought the shrinking would start. i think i commented probably not as long as she drank a chocolate milkshake most nights. but seriously, do we, as women really want to dine on 4 almonds, a cube of cheese with 4 spinach leaves or live with a little (or a lot) extra around the middle? i choose to do my best and no more. like you, i don't want to lie on my deathbed and wish i hadn't passed on the olives. thanks for the thought provoking post.

I loved this post! Thank you for sharing this feeling... I think many people feel like this. Peace be with you.

I know...I've always naturally kind of eaten like a bird...but now I eat like a bird and nothing happens...just tired of THINKING about it and I think we will probably have moments, maybe daily, where the weight issue bothers us, but like anything we can learn skills to combat what our mind is saying.

I have been in a period of despondency about the changes that age has brought lately. Has not helped that I have been sick and have very little energy to even walk. But I am trying to be grateful that i still have things to look forward to and that i can paint. When I paint it all falls away. hugs to you and the pie man.