Marcella, we could not do it without you 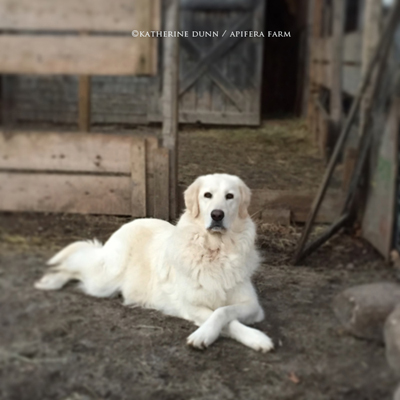 She is one of the most challenging creatures I've worked in partnership with. We had some rough spots in her first year. Maremmas are not like a pet dog, and if you try to treat them like one...well, good luck, and it would also be a disservice to them. They were bred to be livestock companions and guards and while they certainly have many loyal dog like behaviors, they set their own boundaries when on their turf. While Benedetto is much more of a field periphery walker, Marcella sticks with her charges. I have found in Maine that Benne is much better with the sheep, and Marcella's job is with the front barn of small goats.

Marcella came to us as a pup. We got her from a sheep farm that had been raising them as working dogs for years. He knew his stuff and I learned a lot before I purchased her. I will tell you that we looked at getting one when we first arrived at the old farm in Oregon and had our first sheep. But I wasn't ready. I had come from having dogs my entire life but they lived inside at night and were with me during the day. I talked to a lot of experienced Maremma people, and I just knew I wasn't ready, and I didn't want to muck up a good dog.

I'm really glad we waited. But I'm also glad we brought her home. She is a valuable part of our farm. Now in Maine, Marcella lives in the front barn near the house, with some smaller Misfits, and Earnest. She has an important job of keeping them all in check, and she also keeps the rats at bay, and the eagles that float around looking for chickens and rodents. Ever since an eagle took one of our ducks out west, both Marcella and Benedetto go crazy when hawks and eagles fly, and they watch those birds until they are gone.

Most of the challenges I had with Marcella were in her first year and a half. Some of it was my fear of letting her be her-the breeder had told me if she felt she needed to be some place and it meant going under a fence, she'd find a way. She proved that on her second night, coming out under a gate from her barn stall where I bedded her those first nights. There were also simple issues of feeding-you do not get near her food-in any way-and in her first year I had a serious wound from her, and she would not back off. I sat patiently waiting her to release her grip, knowing if I moved my hand it would rip it open. Treating a wound on a Maremma can also be difficult, or trimming nails. As she has matured certain things are easier, but she is always going to be a Maremma.

Now I understand her much better. If I'm in the stall with her and the goats, her charges, she wants attention, but I also know there are some kinds of attention she might see as a threat.

I always tell people, if you came to our farm and Benedetto was at the fence, you might get away with petting him, but that would not happen with Marcella. If someone comes into the barn with me, she is up at at them at her stall. I have to take the person in [and only do with certain people] and we act normally and let her examine the person.

She is a beautiful creature too. She consistently crosses her legs - a dog version of Grace Kelly, I always think.

Happy birthday, Marcella, you are one of a kind, and a good partner. Thank you for teaching me how to treat you.


Posted by Katherine Dunn/Apifera Farm at 9:37 AM

Love this post, Katherine. We can all learn a lesson from this: Let others be whom they are meant to be.