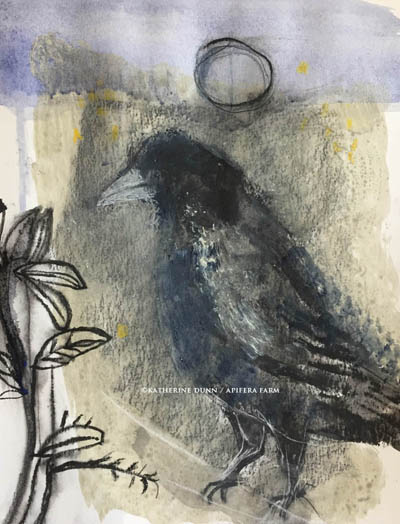 I've always loved crows, believing them to be messengers. Anytime a crow showed up in my life, I believed it was a message of good, to me. As I've aged, I see it a bit differently, a little bit less about the message being about me, but about situations that need answers.

I used to have lots of crows in my art, and still do, but...of late, crows have been visiting Apifera. And I was moved to paint them again. About a month ago, we had many crows hovering around, landing in fields in flocks [a murder, I guess] and screeching in a way I had never heard. I began to see them making a journey from our farm out to The Wood, where I would hear them screeching. I assumed they were mating, and saw a nest up in one of the trees behind the goat paddock. But I began to research, and am learning as much as I can about their behavior.

I've put shelf stand on one of the pasture posts, where I hung a shiny spoon, and I place dog food kernels there, hoping to entice them to land and start communing with me. I know crows respond to consistent reward. So when they fly above, I call to them. Sometimes it feels like they return when I call, but...I think that is my optimism.

A crow can't be forced.

And we have the White Dogs, who ever since an eagle took a duck in Oregon, bark at birds of prey, even seagulls. The dogs are getting more complacent though...but I wonder if the crows won't befriend me because of the dogs.

I just love crows. And I love hearing about their intelligence-like that they make tools to help gather insects, like that they recognize faces and will remember a face that trapped them or threatened them. Some of the screeching could ave been parents teaching the young when a predator was near. The young often help with the rearing of the next fledglings. They mate for life. A crow in the wild normally lives a couple years, but can live up to forty.

A senior crow...wouldn't that be something to help? I will put my intention out there. But I won't force it. Like I said, you can't force a crow. 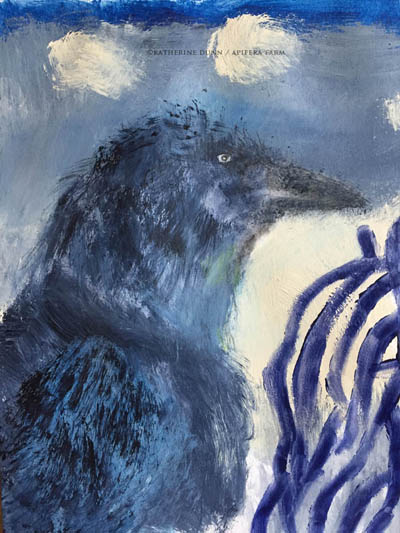 Posted by Katherine Dunn/Apifera Farm at 9:28 AM

Love those paintings, I have been an avid crow watcher since I moved to Florida 20 odd years ago. In my current home they are daily visitors at the feeders and often squabble with the blue jays over who gets to the seed first. I have observed over the years most of the larger birds defer to the smallest. They sit among the branches of the sycamore tree and once the smaller birds leave they come down. I do put out large seeds, nuts and corn for the crows and squirrels and you haven't seen anything until a crow is splashing in the birdbath. I have recently started sketching crows for some fabric and fiber art.