I was minding my own business...and this happened 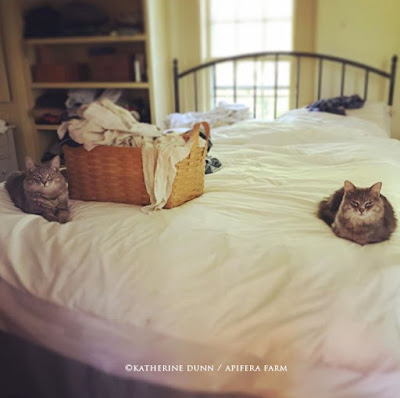 You know the routine...I was minding my own business yesterday morning...really. And then I saw some roosters had been sent to the shelter, the same shelter all the elder cats we have adopted come from. After we had to cull the last rooster for his very aggressive behavior, I told Martyn that my next rooster would be a Bantie. My first rooster, Papa Roo, was a Bantie and I just loved him. The last roo ripped the girl's backs up, they are still recuperating a month later, and he was attacking me, from behind, and despite all my rooster training and whispering–pinning him to the ground, acting like a rooster, not letting him get away with it–he continued to get worse.

So, there were these little Seabright roosters, very different than any roos I'd had, they are really small, about a pound! I figured there would be less possibility for him to mount the girls, or bug them much-if anything I worried the hens would gang up on him.

Well, I got to the shelter, saw the roos, and went into the front office where they know me now-it was very busy-so I waited in one of the cat rooms.

And two blue silver boys came walking over to me immediately. They were super friendly, a 13 year old father and his 1 year old son. Martyn and I haven't had a cat in the house since Big Tony died. I have been keeping my eyes open for the right cat to live in the house. And it was sort of instantaneous. These two just...well, I felt certain they would be a good fit. I didn't even mull it, it just felt very instinctively the right thing to do.

They were relinquished to the vet when their owners, retired, felt they could not afford all the cats, so kept a couple and kept the father and son together and sent them to the shelter. The two are very bonded, which I find sort of unusual for a father cat, but they really are buddies. And even though he is 13, he plays a lot. They are both on special food, for life. I like having a senior and a kid, it is very Apifera.

So I went in for a rooster, and came home with a rooster and two cats. I got out of there before I took home the depressed and sassy white bird.

The little rooster spent the night in a crate near the hens, and this morning I let him out, he is doing just fine so far. And the two cats came into the house and I secured them in the bathroom, thinking they'd spend the night there to settle a bit. I had texted Martyn and told him to be careful if he came home to not open the bathroom door quickly, giving him no further details. When he got home, he went in to the bathroom, and saw a cat, who came instantly to him...and then another cat came to him. He immediately was cooing love words to them.

We decided to just let them explore, it had to happen sooner or later. Muddy was fine with them. He knows to just stay out of the way of cats, although he preens them and in time I know that will be the case. Hughie, blind, tends to bark a bit when he needs help or is uncertain about something. So he knows the cats are here, he just hasn't quite figured them out yet, but really doesn't care.

About three in the morning the cats were up, playing "Run like crazy all around the bedroom and slide under the bed on the wood floors"...so I guess they were having a grand time, and I took it as a compliment. Things were pretty calm this morning, and as you can see, they now own the house pretty much.

They are of course, enamored with the large floor to ceiling bird cage of the Zebra Finches. I tied all the doors shut and am trying to teach them not to bat at the sides of the cage. That is my only concern–they will stress my Little Apiferians out...but I think it will be okay.

I guess the biggest surprise for me last night was...just how happy it made me to have not one, but two cats roaming in the house again. We have always had multiple house cats coming and going, and I didn't realize just how much I missed it. These two will not be going outside.

So much for minding my own business. 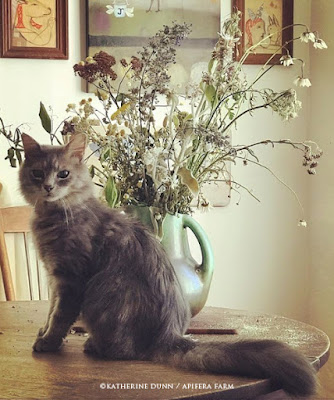 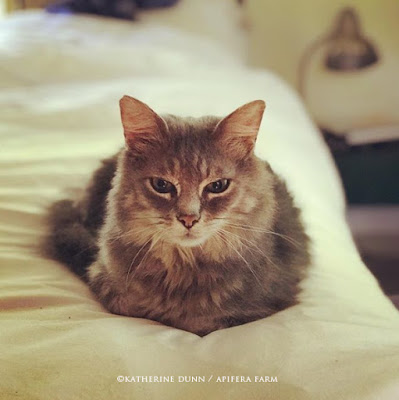 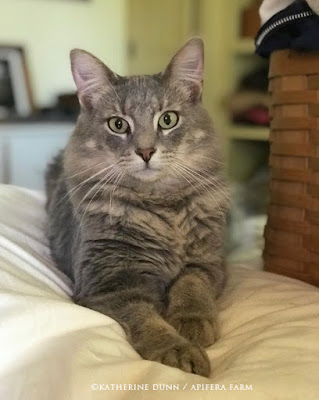 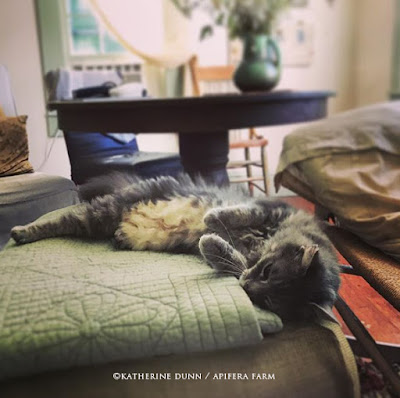 Posted by Katherine Dunn/Apifera Farm at 10:02 AM