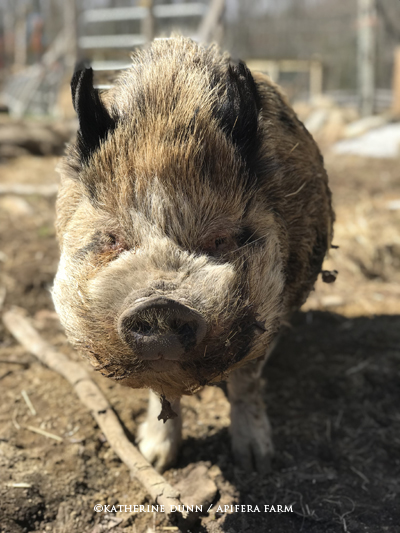 {"Tailes & Tales" is a monthly article I write for the Lincoln County News. I post the articles a couple of weeks after they appear in the paper. This was last month's.}


“I would prefer a grilled cheese sandwich, like the one you gave me a bite of last week,” Earnest the pig said as I handed him some animal crackers a follower had sent.

You see, some weeks ago, Martyn and I went to King Eider’s with a visiting friend. We rarely go out, but when we do, Eider’s is our go-to place. I’ve become hooked on the grilled cheese sandwich with cucumber, two cheeses and red peppers on rustic bread. It’s not something I eat at home and it is a wonderful twist on a simple sandwich. I pour over the menu, tempted by so many items, but lately I still go to that darn grilled cheese sandwich. Well, the last time, I had a filling soup too, so brought home a half of my sandwich. The next day, I warmed it up, ventured out to the barnyard and sat with Earnest while I enjoyed my beloved sandwich.

“It smells appealing,” the pig said, and he swallowed a morsel. I finished the half but left him another bite.

“I am sorry it’s all gone. I would have preferred my own full portion, cut diagonally,” Earnest said.

Back to the present...I handed him more animal crackers, and he ate them, but looked unsatisfied.

“Earnest, I rarely go out to eat like that, so that grilled cheese sandwich I shared with you was a special treat,” I told the pig.

“Earnest, I don’t think they deliver, especially to pigs,” I said.

“The bread is not as rustic or crispy,” the pig said. “Perhaps your griddle wasn’t hot enough.”

“There are no peppers in it, and only one rather bland cheese,” he said, but he ate it anyway, and returned to his hut.

A few days later, I was cleaning Earnest’s hut, re-fluffing his sky high straw bed to ensure his pigly comfort. And there in the corner under the straw was a local phone book, ear marked at ‘restaurants’ with a mark by King Eider’s.

I want to assure the staff of King Eider’s that Earnest the pig does not have a phone, nor can he drive.

{Neither woman nor pig were paid to write such a glowing review but I encourage my readers to go to Eider’s and order our beloved grilled cheese sandwich.}
Posted by Katherine Dunn/Apifera Farm at 9:18 AM