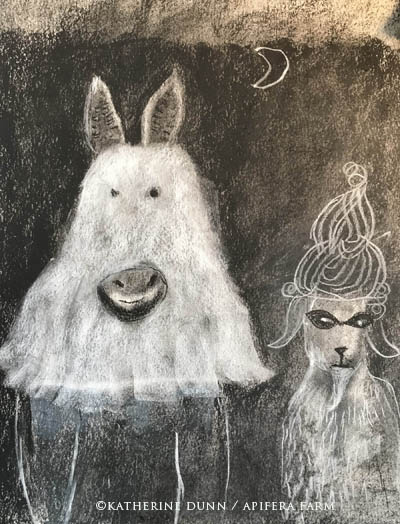 I hear the sound of little feet rushing, and a piece of paper is slipped under the front door lands at my feet. I know what this means. A group request is being expressed by the barnyard. Less urgent requests are verbally brought up at feedings and barn visits.

The paper showed a list of “Requested Halloween Outfits”.

I sighed. I made the mistake of partaking in a small holiday parade at our old farm out west, in which I dressed as a character from one of my favorite movies, The Wizard of Oz. I was a witch and one of the donkeys was at my side, dressed as a flying monkey.

It took a lot of time to make the outfits, but I have to say it was fun, and it made me think of my mother who every year would make me a witch outfit. I was always a witch and my mother took her job as seamstress seriously. Those were the good old days back in the early ‘60’s when as children we could walk all over the neighborhood, in the dark, unencumbered by adults with the spooky sound of blowing leaves swirling at our feet. There was no fear of razors in apples then, or drive by shootings or getting kidnapped. We weren’t forced to pose for anyone’s Instagram feed and we could eat stuff we weren’t supposed to.

So I guess making outfits for a bunch of Misfits in the barnyard somehow fulfilled this yearning for a simpler time, when candy bars were full size, my mother was alive, and all I needed was a good witch outfit.

The list that had been slipped under the door was actually very simple this year, I was relieved. Five of the animals wanted to be ghosts, another group wanted to be spiders. Earnest the pig wanted to be his hero, E.B.White, and Paco the donkey wanted to be an apple. One of the littlest members of the barnyard, Opie the goat, wanted to be a song, and Ollie the goat wanted to be one of The Beatles.

“How do you know The Beatles?” I asked Ollie the next day.

“Jim Bob has a transistor radio,” Ollie said. Jim Bob was another one of the resident goats.

“Well, who knew?” I said another my breath. “Which Beatle do you want to be?” I asked Ollie.

“And I want to be the song “Yellow Submarine”!” said little Opie.

I walked around doing chores that morning wondering how I’d pull it off this year, it was clearly a creative challenge. But as I watched all the goats play that day, unencumbered by the weight of the world and all the scary things we all face each day as adults, I thought of my mother. Just as I was thinking how I could make a little goat into The Yellow Submarine, she must have always wondered how she could make that witch outfit even better that year….just to make me happy.
Posted by Katherine Dunn/Apifera Farm at 6:23 AM