In which a little dog named Bear loses an old friend, but he's watching 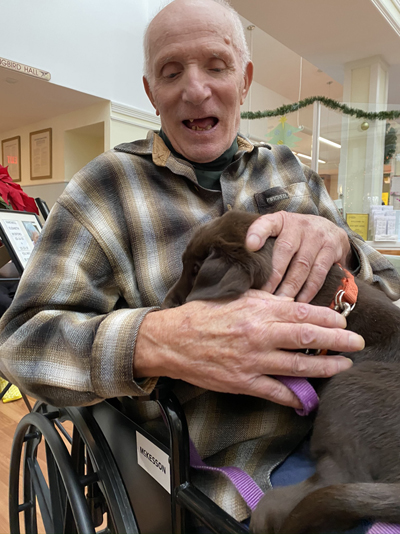 On Monday I got a phone message.

"This is Marge, and I wanted you to know that Bear's friend, John, died on Saturday."

Marge is John's wife of sixty years. John was one of the people we visited weekly at Cove's Edge, and he loved Bear. The feeling was mutual. My followers came to call it "The John & Bear Show" when I'd post photos of the two of them. When I first visited Cove's Edge with Opie, I had seen John in his wheelchair, napping. The next visit, I think I saw him sitting in his wheelchair, outside his room, awake, and most likely waiting for his wife. Marge visited John twice a day, daily. That is what we call devotion and love.

When I decided to get a Lab puppy, I told the breeder I only wanted a chocolate male. As the due date of the litter neared, I wrote her again and told her I was excited, but nervous there might not be a chocolate male. She calmly said,

"These things always seem to work out."

And then, finally, the first pup came out, and she messaged me immediately, with a picture-it was a chocolate male. The rest of the litter was delivered...and Bear was the only chocolate male. I decided that was a sign, and an indicator that Bear was ready to work and come be my therapy dog, and looking back, I believe that more than ever.

When I first brought Bear into the retirement home, he had only been with me a few days, he was calm and a huge hit of course. But as I walked Bear in his carriage down the hall, there was John in his wheelchair, and this time his wife Marge was pushing him. I had never seen John smile in past visits, but when he saw Bear, he had a smile ear to ear. His wife told me how he had had a lab once. I do not know what John's medical issues were, it is not my business, but he could not speak. He was 89. But when he saw Bear, he lit up.

Bear was small enough that he could sit on John's lap. I had a harness on Bear, and a leash, and John had these strong, large hands, and he'd grasp that leash and not let go. As Bear got a bit older, John helped me train him to not use his teeth to nibble, with a sharp little tap on his snout. When other people gathered around John and Bear, Marge would tell him to let others be with the puppy and she whispered to me that she didn't want John hogging Bear. But I didn't care, Bear was met to be with John at this time. I always ended up taking so many photos of the two of them, it was impossible not too, and I'm glad I did.

Unfortunately, a few weeks ago, a stomach virus swept through the facility, so I was not allowed to visit that week. The next week, still shut down, was when the C. virus really began to become a reality. I feared I would not get back there for some time due to the lock down. But I thought of John, and others we visit. I worried he might think we gave up on him and the others. I was anxious to get back. I was able to suggest I bring the llama over and they loved the idea of our window walk outside. It was pouring rain, and there we were walking around with a llama, me and Martyn, my volunteer Polly, and my two care managers who were so great to do it [they needed to get out too]. But I did not see John, and I wished I had made a point to ask for him. I think I was focused on the llama, and by the time we got to that side of the building it was all I could do to keep my glasses from getting wet.

In the three weeks we have been away from the visits due to the lockdown, Bear has grown so much. he would not need his little red wagon anymore, and he could have sat right next to John and he could have petted him. When I found out John died, I was so sad, but so very touched Marge thought to call me directly before I heard. She has no idea how much that meant to me! I chose not to call her back that day, I was afraid I might cry and didn't want to cause pain, so I wrote her a long letter. I will reach out soon.

I told Bear about John too. What I noticed was, he was very calm when I told him. Bear is entering his pre-teen years [he is almost 5 months old!], he is still a very good pup and still very calm and listens [pretty well!] but he is more energized than he was. But on the day I told him, I sat down, and made him sit in front of me, and I said,

We sat quietly together like that for just moments.

If Bear had come along a month later, we might not have had this relationship with John. I truly believe his timing was in the stars so he could meet John, and give him some pup love, some smiles, perhaps visceral memories of his past. His past was full! His obituary shows what a full life he and Marge had, all their work together, his music, their fish business, and their camp in New Hampshire where they hiked and skied. John hiked the Presidential Range and worked for the National Forest Service maintaining trails. And he played the sousaphone in many community bands.

Anytime you meet someone, an elder, remember that-they had a long life of 'stuff', the same way you are doing stuff and making a life, they did too. They are not cardboard figures. You've read about me and Martyn doing stuff since we were young pups of 40... and now we are 60...and in a flash we will be like Marge and John...and so will you.

I have to tell you, and I told his wife in my letter, in my work with the animals and elders, there are always one or two people that make a stronger impact on me, that I internally resonate with and find myself gravitating too. I don't question it. But I often know what's coming.

So a little dog name Bear must have heard my intentions back when he was floating in his mother's womb. I like to think he knew, he knew he had to get out as soon as he could, time was of the essence to get here, so he could do what he sensed had to be done immediately...to get to this person named John. Bear was incredibly bonded and trusting of me from day one, more than any dog I've had. He still his, he still looks to me. And the fact he trusted me to go into that home at such a young age after only being with me 4 days says to me he knew what he had to do. As long as I was nearby, he knew he was there to be Bear. And then he met John.

The obituary came out Tuesday, and I read every word, learning more about John's life. And then I choked up, when I saw this: Per John’s wishes, there will be no funeral, and burial will be private. Memorial donations may be made to Apifera Farm, 315 Waldoboro Road, Bremen, ME 04551, whose animal visits to Cove’s Edge in Damariscotta brought tremendous joy to John and the other residents.

It is not about the possible donations, it is the fact Marge recognized how much joy Bear brought, and that our work is appreciated.

Perhaps Marge will appreciate this, but I have found myself saying to Bear, if he is not behaving quite up to snuff,

"Bear, be good, John is watching, he knows." 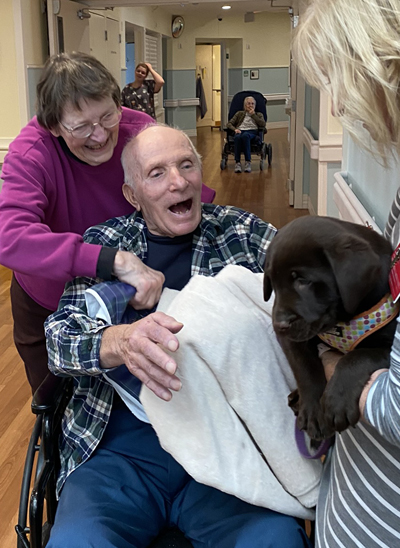