{Me and Boone} It-s not overcoming fear, it's about repeating positive experiences 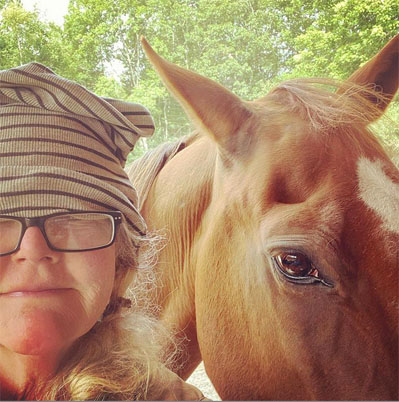 It's been three years since Boone and I had our riding accident which landed me in the hospital for two days with a serious concussion. Many of you know the story-we were riding on a beautiful July day on a trail someone had given me permission to ride on in the woods and we were having a glorious ride, finished off with a canter back...but then something went wrong. I suspect it was the ledge that he slipped on, since the last thing I remember is thinking we need to walk now because I see the ledge coming up.

But we rode on a month later, but that summer I never went back into the woods alone. I tried a couple times but the horse flies were horrible. I got lazy in my mind too, making excuses for myself about riding-letting other tasks take precident over my riding time with Boone. I missed it, but when I'd think about riding, I would get a sensation, and felt maybe I should listen to it. I knew it could be fear, but when I rode I wasn't afraid, ever. it was just the 'before' of thinking about riding.

I was never afraid to ride or be on Boone-it was the idea of what could happen again, and I didn't want to put Martyn through it, or me, or Boone.

The thing is, in order to get confidant at anything-riding, riding a bike, working with livestock, cooking, playing guitar, teaching, hooking up a trailer–you have to do it, over and over. And over. When you stop, you have to regroup and remember that in order to have become confidant, it took repetitive positive experiences.

So, I made a promise this year, after fly season, to begin a new with Boone. Since I'm hauling the llama all over the place, working with a large trailer is back on my 'confident' status. Trailering too requires lots of repetitive positive experiences to feel safe doing it. I've ridden a few times and bought boots for Boone too, since he is so flat footed but shoes right now are problematic because we don't have a bottom wire in our field and he has gotten his shoe caught in the fence-dangerous and scary for all. Boone and I have a date to go up to Camden Hills to ride with a woman who lives next to the state park, I can't wait. And I'm seeking places -short trips-to go with him.

Riding the last two times, felt great. Boone is his usual stoic self. The main road here is busy and a pain, but Boone is fearless and we only go on it in the culvert for a short stretch to get to our other roads. I still hate being on it. But we are very careful.

Getting back in sync with Boone is not about overcoming fear. I do not fear falling, I don't think about falling. Accidents happen, but it is more about rebuilding inner trust that I'm capable of repetitive positive experiences, simply because I'm working at it agian, over and over.
Posted by Katherine Dunn/Apifera Farm at 8:47 AM

Email ThisBlogThis!Share to TwitterShare to FacebookShare to Pinterest
Labels: Rides with Boone

You have a good plan for riding with Boone again, I admire you for riding again and getting repetitive positive experiences.