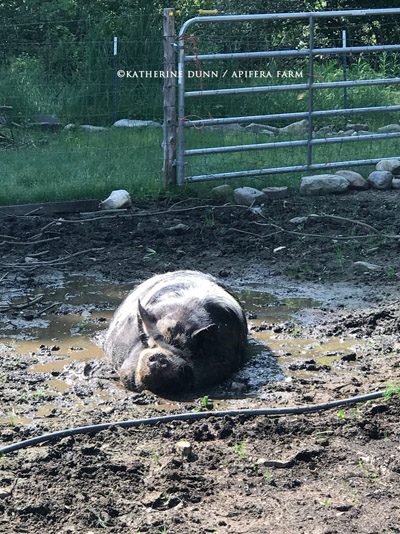 I always wonder if the people that say they thrive in heat are mostly half naked, sitting still in the shade, by the pool. I had a pretty much complete stranger quip at me online when I was sharing my real discomfort with the heat, to just 'embrace it' like I do winter. I did not respond. I hope her bikini fell off as she waded in the shallow end with her iphone in hand.

I would never tell a person who has a hard time with winter to 'embrace it'. I know a few people that live in pretty harsh climates, much harsher than Maine [I do not consider Maine harsh like some people do who simply view Maine from a distance] and these people complain all the time on social media about winter. Many of them can't move, or don't want to for various reasons. And if I am so physically affected by heat, I can empathise with people that are equally affected by cold.

Everybody's body is wired differently. Leave other people's bodies alone [if only the GOP party understood this, alas].

The person that quipped this absurdity to me some years ago, she also had lovely fingernails. If she came here on a 90 degree hot and humid day, I would love to see how many were left after barn chores. My dream would be to first send her up to the hayloft, and have her buck some hay-it would all stick to her arms and legs and she would have no pool to jump into....I could suggest a mud bath though with Earnest....or a dust roll with the llamas. Then we'd move onto mucking stalls and cleaning the scum in water buckets...all while slapping at biting flies.

I am being cynical. Heat brings it out of me. I always felt cynicism is the exterior cover of anger. So I guess I'm angry...at weather. And my mother raised me to say, whenever there was weather we don't like, "It's only weather." But this was before barn chores and hay bales and biting flies entered my life. Or maybe I'm just angry I can't afford to have a pool. I love to swim, but only in pools. I am surrounded by water but I just can't swim in lakes, ponds or the ocean. Tried it all and I am just too much in love with my feet feeling ground I can see. It's one of my many flaws–I'm a Pisces that can't swim in the ocean. I have much too much respect for the power of the ocean to swim in her.

I suppose I have insulted everyone that has a pool. But it's hot and humid for the millionth day [a pig exaggeration] and you will just need to "embrace it".

Posted by Katherine Dunn/Apifera Farm at 9:39 AM

I love the cynical, humorous you...I love you and your many aspects, including the one you just revealed who emerges out of the heat and humidity!

Heat makes me cranky too and I don't have barn chores or flies biting me. Hang in there. Hopefully, we will have a cool Fall.

I wasn't offended, but you lost me at the political reference. I guess it's the heat getting to me, but I am trying to find places that avoid politics these days--hot or not hot.

I write my feelings here, Lin. Good luck to you in the coming months.

For those who do not understand the universal language of all animals, including the human one, physical misery, due to extremes of temperatures especially, is just that, pure misery. And just as universally abhorred. Saying “ embrace it “ is like asking your dog in mid summer when his tongue is hanging out and dripping hot saliva if he chose his thick coat or a treeless yard.