The tall, dark and handsome gent has landed 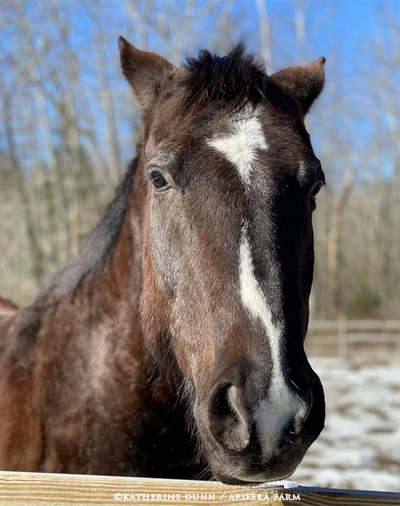 He arrived yesterday. Our friends at Horses With Hope were good enough to trailer him down for us. We all laughed that he kind of looked around and thought,

He had to go through so many obstacles to get to the equine area. Of course we don't know if he's ever met a goose, ducks, midgets dressed as goat, dogs, and llamas-but we doubt he ever encountered them all in one place.

He did great. he came out of the trailer sweating a little, but was dry. I always feel for the animal on delivery day-do they wonder if they are going some place bad, are they worried about yet another trip somewhere. He has been many places since he left the Texas kill pen  beofre landing at Neer North and then Horse With Hope.

He entered the barnyard and I had the donkeys and Boone in an adjoining paddock. Harry and Sparkle, and of course, George, were there to smell him toe to head. He did fine. He was a bit concerned at first with George, but George deserves to get chased a bit. It calmed quickly. he and Boone did their gelding squeels and Harry sniffed his but, disappointed he was a boy not a girl.

AN hour later i let the others in and let them all to their thing. He is no pushover, and is still finding his place in the herd of course. I liked that he would come to me each time he investigated an animal. He seems to be very people oriented which is why they thought this might be a good home for him.

This morning, all was well. I do have to reconfigure the water buckets short term. I noticed at breakfast he was licking snow. I led him to the water bucket, but he really is still unsure about Arlo, who has the paddock right next tot he water. I took water out to him in a bucket and he drank it right up. In time, he will figure out Arlo isn't a giant muppet.

I am excited to work with him with people. My friend who was once an occupational therapist and worked with a local place that helps special needs kids wants to do therapy sessions here, more like one on one with kids. I am not that experienced with kids, so she is the kid expert, and I am the horse handler. I'm really excited about it. Stay tuned on that.

And, we finally settled on a name. Somewhere along the way, he was called Shadow, i don't know where or if that was his kill pen name. Nothing wrong with the name but you know how I am. A new lease on life calls -sometimes-for a new name. So we came to Sergeant S. Biggs.  The 'S' is in honor of his time and journey as Shadow, the Sergeant for his calm and approachable demeaner and the biggs for...well, he's big!

Sergeant S. Biggs is a wonderful new name to take Biggs into his happy new life.