Earnest and his free haircut day 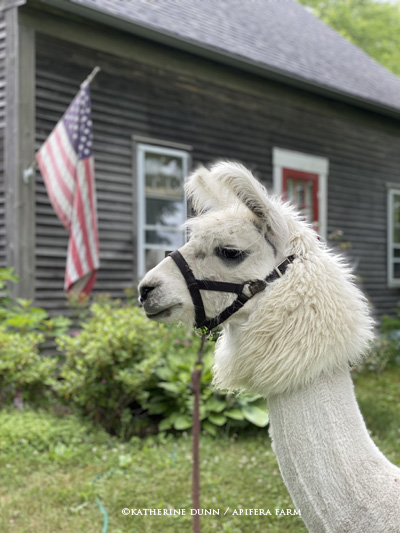 “Mrs. Dunn! Mrs. Dunn!” the little voice said as I left the house for the barn. It was, of course, Pickles, the little goat full of Pickle power.

“Mrs. Dunn! Someone took all of Harry’s hair off! It must have been a very big rat.”

I immediately knew she was referring to the newly sheared llamas.

“Pickles, every year we shave the llamas, that’s all it is, no need to worry,” I said calmly as we walked to the barn. “Harry needs to be comfortable in the summer so we take his hair off.”

Harry was in ear shot and walked over to us. Pickles looked him up and down. She touched his newly shorn body.

“It’s so soft, like a baby bottom,” she said. When she had touched a baby bottom, I don’t know, but I had to much on my agenda to ask.

I went about my chores in the outer barn and left Pickles to her day. I was just about to leave the house later that afternoon when Earnest the pig knocked on the door.

“Mrs. Dunn, may I borrow an extension chord?” he politely asked.

Extension cord plus pig plus electricity, I thought. Hmmm. We walked to the barn together.

“May I ask why you need a power cord, Earnest?”

As we entered the barn there was a standing line of little goats and chickens near a sign– Earnest’s Haircuts free today! And there was my electric dog clipper.

“How did you get my clipper, Earnest? I keep it way up high in the feed room,” I asked.

I was about to put an end to what would surely be a disastrous day of haircuts, but I stopped myself, and I thought of go-to mentor, Andy of Mayberry. What would Andy say? I thought a bit and said,

“Earnest, have you ever given a haircut?”

The hens were getting restless as they stood in line.

“A lady needs a new hair do every couple years,” said Victoria, one of the elder chickens.

“I want a racing stripe down my back!” said Pickles.

“Can you do stripes?” asked Ollie the goat.

As the first hen stood on a box Earnest had dragged in, I quietly stepped into the feed room and pulled the cord from the wall. Earnest turned on the shearer but it was silent.

“Oh dear, it must need some maintenance, Earnest.” I took it from him swiftly. “I need to add oil to it and we’ll get Mr. Dunn to examine it too.”

Earnest looked a bit disappointed, as did the others in line. But Pickles appeared from the back of the line, and rushed up to Earnest.

{PS: I confiscated the scissors and nobody lost a hair, or feather. But Earnest did ask me how one might attend beauty parlor school.}

Posted by Katherine Dunn/Apifera Farm at 7:41 AM

So here I am commenting , which is unlike me. Never have. Why today? After all the time I have read and forwarded so many of your posts.....Something shoved me today
So to you, my VERY special ,spirit friend, I have come to know that the words you write in your posts change our world. Please believe me when I say that.God holds your hand.