I wrote a lot about Walter this week. I let everyone who follows us on social media that Walter was transitioning - it became very clear on Tuesday or so that he was starting to let go. There is part of me that wonders if he knew we had the puppy–I told him, of course– and he felt he could leave. I don't know. But I did find the juxtaposition of a new pup so full of life and joy next to the dying old man such a story in and of itself, the story of the bookends of life.

I had placed Lemon in the freezer, wrapped, waiting for a better temperature to bury him. I remember thinking that maybe Walter would die soon too andI could more easily bury them together. But I didn't really envision Walter dying so soon after, a month later. He failed really fast. It's like he just ate up all the love and was relaxed and had made his strides and was ready. Maybe seeing Lemon go too helped him. He had a peaceful death, and I was there to the end. It took him about 48 hours to leave. When I sang this last song, he was still conscious, but barely. That morning he was still able to sit lie with his head up, and when I came in he called to me, a little hello-goodby meow. I knew that he was saying one final hi and bye.

So they are buried now, the important ritual the caregiver  does not only for the animal, but for themselves. Martyn often digs the larger graves but this time of year the soil is easy to move and I dug the grave, placing them near the lilacs and peonies.

There is a space after death, a space for the caregiver–'what do i do now with this time I cared for this creature?' I read some things from different native Americal tribes on their death rituals. It was really interesting. Many of the tribes believe that there is a four day period after death where the body must be left ass is, or with rituals and grieving before the spirit leaves. I do think there is a space like this where the dead have to figure out how to navigate that transition form one realm to the next, or maybe it is the final letting go of worry about what they have left.

"Okay, she got me and Lemon buried nicely, I can officially go, and she's okay," maybe that is what Walter said. "She has her puppy to help her be happy, I can leave," he thought.

I am glad I have the puppy. I was very proud of Walter, and me and how we slowly worked through the layers of fear and came to a beautiful place of trust. I plant to write about it in book form. I had been thinking of doing something about Walter, and Lemon, but when I knew Walter was really leaving, I realized just how attached I'd become to him and writing and art will help me, and maybe it will help others in time. I'm so glad I agreed tot ake them in, and so glad the shelter asked me. They knew they were non adobtable and most would not have the time or patience, or set up, to have let Walter and Lemon go on that long. I'm no hero, others could have done it too, but the shelter made the right decision. I'm glad I gave them stability of two or so years in the end. They lived long lives, almost 20 years. And for the last year or so, Walter understood the feeling of touch, companionship and trust. Carrying around all that fear...must have taken a lot of energy.

The elder cat suite is strange right now, it is just 20 year old Tommy and 19 year old Inky. Today I held Inky and got him to purr. He is a nice guy but not that interested in being held. Tommy likes to put her head into your head, as she sits on her perch. I always thought Tommy would be the next to go-she is 20, but she is still here.

He was such a great friend...such an honor to have worked with him as a team.  When I took this photo five days ago, it was the day I noted on Instagram that he was extra attentive to me that day, as if he did not want me to put him down, and when I did, he followed me and sat at my feet. I think we both didn't want to say goodbye. I think sometimes we have relationships with certain animals and there is a bond like that. I felt that when Opie died, for one. There were others, and Walter was one.

But when I sang that song, he was ready. I drew this sketch as I sat near him sleeping a day before he died. It felt like the way to honor him, but he with him. 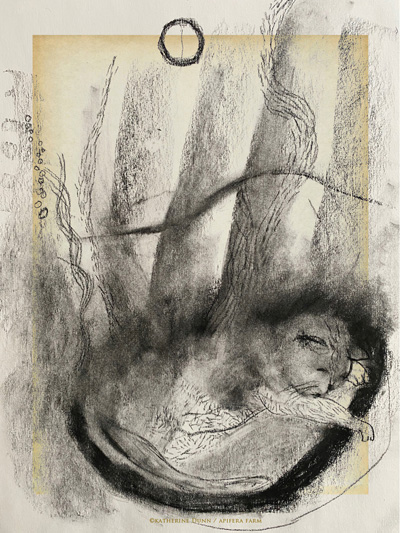 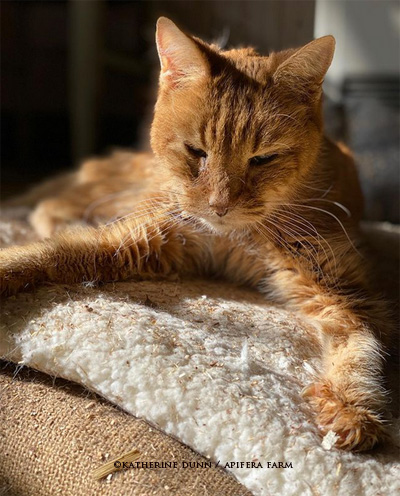 Posted by Katherine Dunn/Apifera Farm at 8:33 AM

thank you for sharing your experiences, it has been helpful for me beyond expression, I am sorry for your loss and glad for your connection to these animals for both you and them.