Old Inky gets roomate and more to come 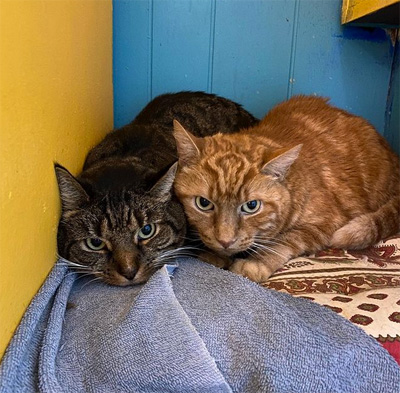 {Photo taken the day I picked them up, they are sweet but scared}

It's been busy here and I have neglected to write here. I actually have some thoughts on some issues and I will find time to write about them here and maybe hear your input-more on that next week.

After Walter died, and then old Tommy soon after, it left us with only one old cat in the suite, Inky, who is 20. He is doing fine, getting thinner and more worn but still strong. I don't sense he's checking out soon, but I did not want him to be alone in the room, in case he did. He's very stoic and independent.

At the same time, my heart needed some space after Walter died, and I threw myself into caring for old Tommy and her matted coat. I wanted her to be matt free before taking her journey, that was my goal. Twice a day I carefully worked n her matts with various tools. And weeks later, I got them all out. She looked like a war hero with her skinny old body but we did it. And then soon after she died.

I decided to let the universe bring me more cats, rather than frantically fill the room up. I did touch base with my shelter contact, but there weren't any at that moment suitable for our set up. But then a few days later, she contcted me with two old cats, bonded, whose owner had died. They'd been to two shelters [often shelters help each other out like this] and they thought of me. And one is orange. We thought he was a boy, but until I can really look we aren't sure as the intake paper says he is a she but my contact is sure he is a boy. Sure acts like a boy.

How nice, and orange boy, like Walter, I thought.

And then, that next day, a 15 year old orange male comes into the shelter. I will pick him up this week.

You know what I think, I'm sure. Walter sent them. Time to get back in there and do some stitching, he's saying. 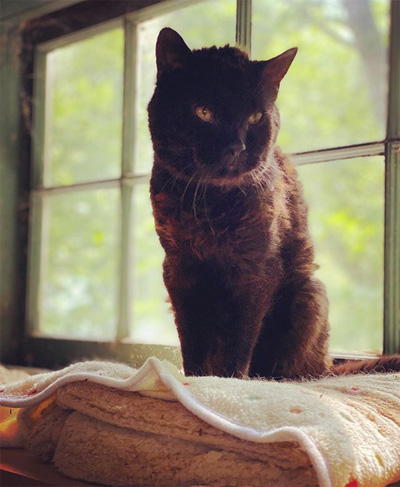 Posted by Katherine Dunn/Apifera Farm at 8:11 AM

Hooray! I knew it wouldn't be long until they found you. I love me an Orange Stripey! They are just the BEST. Yea!!

They are so wonderful!