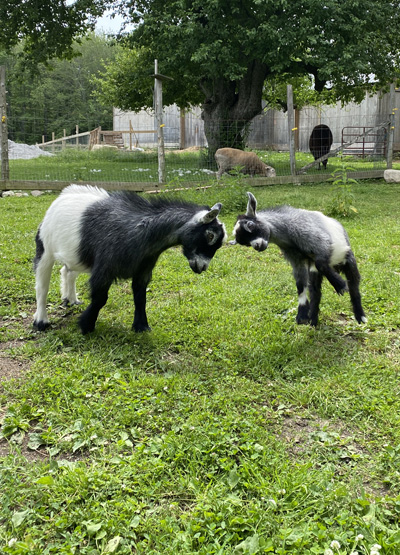 My latest story from Tails & Tales for the Lincoln County News

“That is not your decision at this juncture,” I told the little goat. “It is for the good of the barnyard.”

“But I was just using my Pickles Power,” she pleaded.

“When one has been given such power, one must use it with wisdom, and empathy for others,” said Earnest the pig.

Pickles the goat was turning one. And it had become clear to all of us that she had developed a bit of an  attitude. Her Pickles Power was going to her head. And that is why I told her that for the rest of the summer she would be going to charm school here at the farm.

“Who will teach Pickles all about charm?” asked Ollie.

Everyone turned to look at Earnest the pig. It was a no brainer.

“I will be teaching you about many things, Pickles-languages, music, cursive writing and how to enter a room and be noticed without being arrogant,” said Earnest.

I wonder if I can attend this, I thought.

“I know how to enter a room!” said Pickles. And she leaped and twisted and turned in the air. “Like that!”

“You can still leap and run, Pickles. You just need to learn how to not be so much of a ….” Earnest struggled for the right word.

This entire time the two baby goats that had recently arrived, Puddles and Hannah, were sitting quitely watching. They were often on the receiving end of too much Pickles Power, as were the elders.

“I like Pickles, but she hurts my feelings sometimes. She called me a squirt. I can’t help it if I’m extra small and nobdy wanted me on their farm,” said little Hannah, a bottle baby.

“We want you, Hannah” said Poetry, one of the elder goats.

Pickles suddenly looked very sad, and worried. She started to walk away from the group.

“Where are you going, Pickles, we aren’t done talking,” I said.

“Mrs. Dunn, I’m sad with myself. I thought I was just being me,” Pickles said.

“You were indeed being you, Pickles,” said Earnest the pig. “And with a bit of self awareness, you will use your Pickles Power for the good of others. You are young, that’s your ownly fault, there is much to grasp at your age.”

Puddles walked to Pickles and said, “It’ll be okay.” And Pickles head banged him in true goat fashion.

“I think this is a good place to start, Pickles,” said Earnest.

And he put his arm around the little goat and began to walk her to his hut. As he walked away I could hear him imparting his first wisdoms on her.

“Pickles, one’s physical strength is temporary. But the actions of our hearts is how we will be judged-for it shows how much we love.” 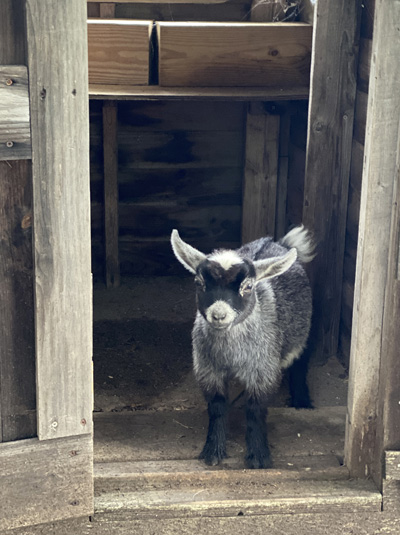 Posted by Katherine Dunn/Apifera Farm at 9:27 AM