Earnie dies...he mattered to me 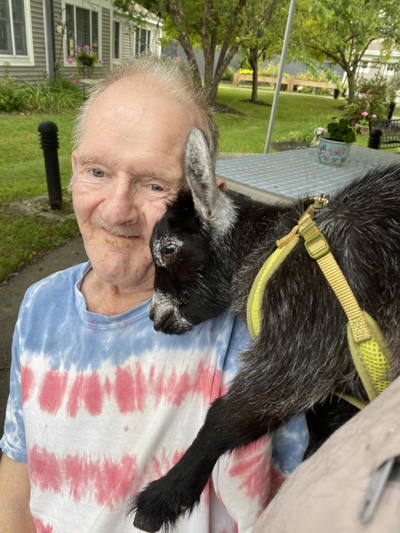 One of our elder friends from Cove's has died....Earnie, sweet Earnie. If you follow along you know we loved him and have many photos of him with the animals. He was 87.

I think we first met him in 2019, or maybe 2018. It was when we first brought Opie over there. Earnie was a farmer his whole life, since he was a kid. He lost his arm as a young guy in a farm accident. He told me all about it.

Earnie loved animals, and they responded to him. Opie would make his sharing rounds with the people, but then he'd keep returning to Earnie. We all noticed it, and it was a sense of pride for Earnie I think. He was just a magnet. They knew his motives were pure, something you can't say for all people.

And then there was his tie die shirt which he often wore. I will remember him in that shirt.

I was at Cove's the other day dropping off puzzles, and I happened to get to meet his sister in law, who was with him a lot, including the day before, and hours before he died. She got to say her goodbyes and he did too. He lost his wife years ago, and also had two lady companions at Cove's who both passed on.

I suppose when you are in a home like that, especially when you are totally relying on care from others, and you can't walk or eat on your own, you can't do the normal things a body must do just to go through a normal day, I suppose there might be times where you wonder if any of it matters any more, or do you yourself matter. The elders, especially those like Earnie are often the ones people don't want to see, they avert their eyes, they don't know what to say. As one of the elders said to me, "They are afraid they will be like me someday." I believe she was right. Earnie mattered to me. And I know he mattered to the caregivers, and residents, and his extended family.

He was always at our visits and he always was in good spirits despite the losses and the health issues...despite losing all independence...he always smiled. He had some good farm stories too. I always told him I had to find a cow to bring for a visit-he had farmed cows his whole life.

I don't even know if he knew my name, nor the farm's. But when he saw me he knew who I was and what it meant. An animal could take him out of his head, out of his reality for moments and I'm grateful I could do that for him. In that way, I guess I mattered to him weather he knew my name or not.

We will miss him, truly, we will. I think he must be tie dying the sky somewhere, and riding a cow home.

{You can send a donation in Earnie's honor to Acitivity Fund at Cove's Edge. Cove’s Edge c/o Activities Program, 26 Schooner St., Damariscotta, ME 04543. This is a Medicare facility and these people operate on shoestrings.} 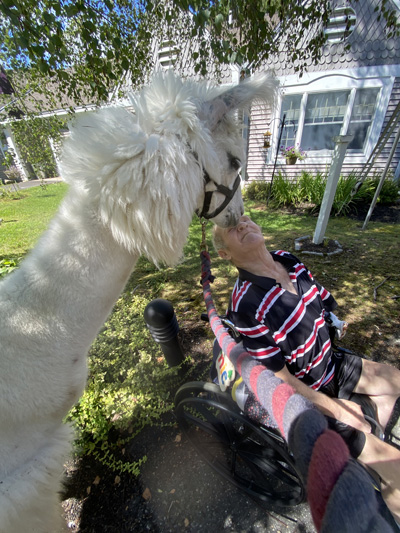 Posted by Katherine Dunn/Apifera Farm at 11:58 AM

The wheel turns. Grief and joy are entwined.