With great regret I write today 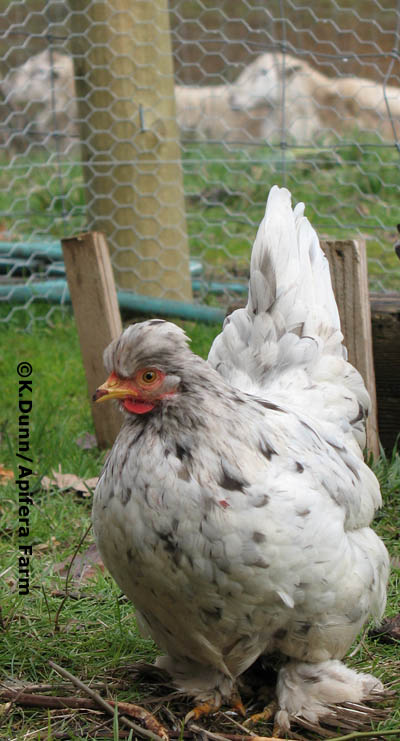 I was so tired that night, it was almost 8pm when I came up from working in the field for four hours. I did my nightly feedings, and as usual, finished with tucking all the chickens into their secured house. But there was no Inkie. She had been setting for the past two weeks. I had even bought fake plastic eggs to give her - this lets me still take the fresh eggs from her roost, but leaves her with something to set on, otherwise she starts hiding eggs out in the barn somewhere. She is a fierce and loyal setter, so when I saw that she was not in the roost as usual, I knew she was in the old barn somewhere, tucked on an egg. She had done this several times in the past, and once she was gone for two days and nights before she returned. The old barn is not secure, but since she had done this before, I let it go. I was tired. "she'll be ok..." I assured myself. I just wanted to sit down.

The next morning, I expected to see her in the barnyard, but didn't. I fed everyone, did chores, and went back to the studio, thinking she'd be around later. Her hiding spots are almost impossible to find. Later that day, I went to try to find her in the part of the barn she favored for hiding. And I found feathers, everywhere. One pile led to another. They were Inkie's, no doubt. I followed the trail of feathers to the fence line by the woods. No body, no blood.

It was most likely a raccoon. Our first chicken death by a predator [which might have been Lyndon Baine's demise too]. But I was 50% responsible. My selfishness contributed to Inkie's death. If I had just tried to find her hiding spot, I might have.

Inkie came to us as an adult chicken, who knows how old. We had noticed her eggs were getty runny, a sign of age [or nutrition issues, but all other hens were laying well]. Martyn said nature took it's own course, but, I was part of that nature too.

Inkie was a Bantie, and we always laughed when we'd see her rush across the barnyard in the morning to get to the compost pile for her worm breakfast. She ran like a Muppet, we always joked. Or like a little person in a chicken suit. She gave us a little white egg every day for 2 and half years, and helped brood Vivienne, Gracie and Chicken Named Dog. It seems to me these are accomplishments to be proud of.

I hope it was a quick kill. One can torment themselves imagining the last minutes of any one's death. That's the journey we only experience once, on our own, even if surrounded by loved ones, or creatures of the night.
Posted by Katherine Dunn/Apifera Farm at 12:12 PM

Kathryn I am very sorry about Inkie!! We have lost a horse this week. Much beloved and no less special than Inkie. But Martyn is right, we are not omnipotent, we are human. We do what we can, and I believe they forgive us the rest.

Katherine, i am so sorry for your loss....She was a good and beautiful girl...

It is evident that Inkie was loved and lived a good life while she was with you. Applause yourself you giving her that good life.

Darn those chickens anyhow. they go off hiding and then expect us to feel guilty, which we do, when they meet their maker - (and so often in a disastrous way.) Sorry for the loss of your feathery friend. T.

It wasn't your fault, you musn't think that. You write so wonderfully about her, remember the smiles she brought to you.

Oh how sad. I can only imagine how terrible that must feel. You are a very special person Katherine.

It really is not your fault! I would feel much as you do. The way of nature and animals is beyond us more times than it isn't.

Don't be too hard on yourself, K. It is nearly impossible to find a chicken who doesn't want to be found. They are like cats in that way...
R.I.P. little Inkie.

Inkey made a choice too. Life is full of them and sometimes it's the one that leads down the wrong road.
Try not to blame yourself. Farm life is filled with quick decisions and you can make yourself crazy with blame. Say goodby and send her love.

Oh, Diana/Deedled - I'm so sorry about your horse! I can't imagine the loss of Boone, or the donks. Equines are big magnificant creatures, and surely there is such a hole now...I hope it was peaceful.

Thanks to all - chickens can bring out the love in people! It's nice to be reassured that my 'bad farmer' status was self induced. Here's to healthy, safe chickens for all!

Awww, Katherine, I agree with the rest--you are being too hard on yourself. You have always been a sensitive soul!

Thanks, Zan...you're right - that book about "How to live with the highly sensitive person' is about me...remind me to tell you all someday about my 3 day effort to save a moth...

So sorry about your hen. It's not your fault that she hid away, please don't feel so bad.
Take care,
Tracy M.

I am sorry Katherine. It is too easy to do the shoulda, woulda, coulda thing. Racoons are a force of nature. They are cute but I have lost a lot warm fuzzy feelings towards them because they terrorize the neighborhood.
Rest in peace Inkie, you were loved and are remembered.
Peace,
Tonia

So sorry Katherine - it seems that this has been a week for losses for so many of us. Inkie was beautiful and she was blessed to live on your farm. I am sure she is having great fun playing in the grass with Bramble.

Oh, dear. It sounds like Inkie was such a fun and dear little hen. She had a good life with you and thats what you need to remember. I am just like you Katherine, when something happens to one of my furry loved ones, it is somehow my fault. It comes from loving and holding on to them so tightly.
Sometimes things just happen with no fault to be given.
I too am very sensitive about living things large and small, even moths, spiders, beetles, ants etc. You are not alone......

I'm sorry for your loss.