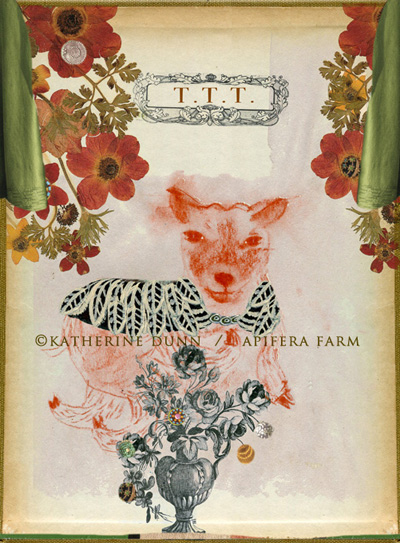 While I knew a few weeks ago her strength was limited and appeared to be waning, I had hopes she would get to Spring for the warm weather. But it was not to be. When we left the farm on Friday to fly to California to celebrate my mother's 87th, Tasha Teats was no better or worse than days before. She was eating well,was able to get up on all fours and had a good expression. I explained everything to my farm sitter and all appeared
fine that first night when she did feedings. It was a very cold nite. The farm sitter found her on her side in the morning, almost unconscious. She held her but her neck was listless. She said her expression was blank. Over emails and phone calls, I knew Tasha was in the death spiral - something I've seen and know it is not to be altered - especially with an elder who is already weak and thin. I opted to let her go without the vet's assistance - I could tell from the farm sitter's descriptions of her movements or lack of them that she would be gone within an hour or so. And she was in and out of consciousness so to speak. The farm sitter held her all the way through, with Rudy near by. She did everything I would have done and I am so grateful she was there to hospice her. As far as deaths go, she had a peaceful one surrounded by human compassion and her life long mate.

It was very cold all weekend and I wanted to bury her properly - and have my own closure. So upon returning home, I let Rudy see her one last time. He was not interested really - he had said his farewells a couple weeks ago. I remember his expression a couple times as I'd go into check on Tasha T, her head resting on him - he looked at me with a very specific expression, one that told me he really got what was happening. He also began separating himself more from her. So I carried her to the pumpkin patch and we dug the hole he did come to the fence and bleated. It's easy to place human emotions on our animals, but it was not a grieving bleat, he was greeting me. In the past weeks he has become one of the 'followers" - escorting me in the barnyard. This morning, he seemed so light in his step, with a bright, content look. I think he took his role of care taking seriously, but he was ready to move on.

I snipped a lock of his hair and laid it on Tasha's body in the grave. So no more pain from crippled little bent legs.

I don't know why things happen in any given sequence. I wanted to be there and beat myself up for not being there. But it's just part of nature's call. Having a farm sitter that took such care and thoughtfulness with her meant the world.

She was only with us such a short time but left a mark, and a space. The space will be filled with life.
Posted by Katherine Dunn/Apifera Farm at 3:25 PM

Art From The heart said...

So deeply sorry for your loss.
Animals are the best friends we have in life.
Hugs to you and the farm family

Sending much love, and celebrating the gifts Tasha brought.

She had all she needed in the last months, I know that is all I can give her...