If you'd like to help Tasha and the other Misfits of the Apifera barnyard you can visit the funding page.

Tasha Teats Tudor has been struggling of late. When she arrived in November she was just as crippled from arthritis, but was able to walk more without falling. When she did start falling a couple of weeks ago, it was usually on a slight incline, and she often ended up "cast", which can be dire or even deadly for a little pygmy or elderly goat - if they can't right themselves. Fortunately I found her each time, and immediately started leaving in her suite during the day so she had less chance of getting knocked or stumbling.

Then last weak her appetite fell off and she seemed very weak. I dosed her with vitamins and shots of B12 but her eyes still had lots of pink in them making me feel she wasn't totally anemic. She is very thin and I wondered if her time had just come. She will be 13 in April.

I have a theory that an animal that has struggled in life, has been abused or neglected, or is just in a bigger herd where they don't feel they can let their guard down - that these animals fight the circumstance they are in in order to stay alive. But when they are brought to a place they feel safe in, these same animals let their guard down and feel safe enough to let go.

Tasha and Rudy were not neglected. Their owner for life lost her husband and found herself, after a year, in a situation where they couldn't keep the goats and she sent them to New Moon Goat Rescue. There was another goat, a larger goat, that was a bit over zealous with Tasha. Maybe now that he is not bugging her she feels safer and is letting go a bit.

Today I got her out to see how she'd do in the barnyard. She was only out for his brief movie, and did fall going back in the barn - but, she was strong enough to get up. And tonight at dinner time, she got up from her nap and was bleating to eat dinner - a very good sign.

I don't know how long Tasha will hang on. Maybe it was a cold. Maybe spring will come and she will live many years. I know she can't be left alone in certain places because she will fall so she is very special needs at this point. I considered investing in a wheelchair for her but I just don't see how that will alleviate the danger of her casting herself.

I took these photos today of her eating in her suite with Rudy, and additional guests in the form of pig and Lofa. I thought the light and essence was quite spiritual. 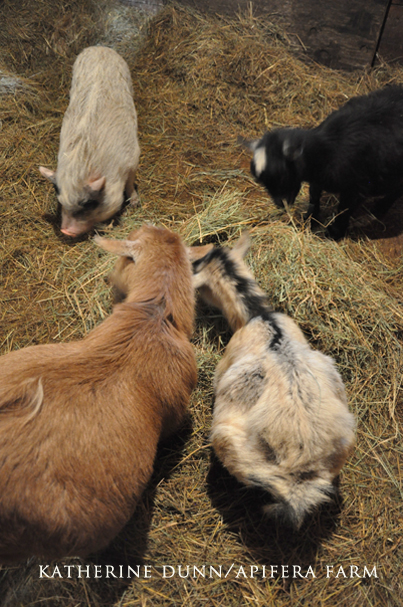 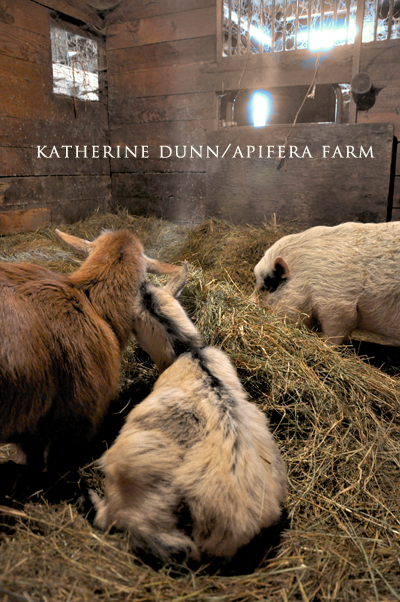 That 2nd photo is so sweet with her resting her head on Rudy, I assume. I hope she has much more time at Apifera.

I hope she will get the strength back in her legs. She looks so sweet. I thought that the photos did have an interesting quality in the light and the animals looked so peaceful. I imagined they looked like they were saying grace when I looked at the first photograph.