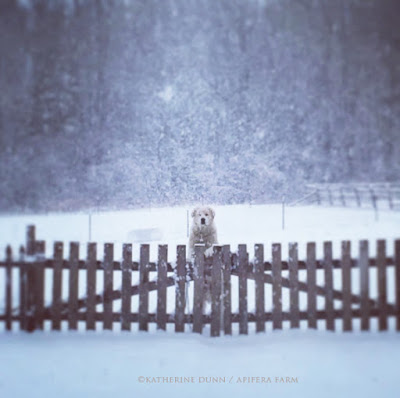 We had our first real snow, a beautiful blanket of snow, with snowflakes all day yesterday that came down in different sizes, large snowflakes, some wet looking gin the sky as they fell. I had been looking forward to the winter here in Maine since arriving. Yes, that's correct, looking forward to winter. It is by far my second favorite season right after fall, with summer being my 'carry on and endure" season.

Winter and snow are, for me, full of a deeper form of communication, not only with myself, but with nature and therefore with my creative soul which is wrapped in nature. The fallen snow covers, but it hides things and one gets to rediscover them if we pay attention. I walked from the Misfit barn to get to the pig water bucket, and tripped a bit...it was the hose we had not picked up yet. It left a faint mountain range, the hose, with the snow on it. An entire new shape was created with the snow over the hose. In Japanese there are many words to describe the different forms of snow. "Yuki" means snow, but "yuki-boshi" means the little hat shapes that form when snow covers an object.

So I admired all the yuki-boshis yesterday.

The White Dogs love the snow, Benedetto especially. He was not a fan of rain. I knew he would thrive in Maine. He lays around in it, plays in it, eats it, sleeps in it into the dark night. The sheep's thick wool coats are like yuki-boshis too. The Eskimos have over a hundred words for snow. "Jatla" means snow between your fingers and toes-we all had that too.

I sense that Maine is bringing me something I needed, that for whatever reason, I had to get here, and nowhere else, not Oregon, not any other place on the planet. I had to come to Maine for the next step of my journey. It will be about going inward more, a deep journey. I also realized I have been hesitant to fully engage here, but that changed a few weeks ago. Perhaps it was the fact six months have past and I am over the shock phase of leaving our land in Oregon. The land played a crucial role in my art and psyche there, and it shaped my stories in ways that only that land could. My image was wrapped up in a pastoral feeling there, this property is different, and it has taken me some time to come to terms with it. It is more of a village feeling here on the property, very New England, meaning the Misfit barn sits about 30 feet from the house, and the new barn we built is about 150 feet from the Misfit barn. Everything is spaced more tightly. Houses often sit on the main roads here, very common in many winter climates. Our sits slightly back, about 100 feet, but it is not a feeling of being 'way out in the wild west' like the old place in Oregon. I had to come to a sense of peace with that. The road itself has been a real hardship on me. But I have come to a new understanding about that road. Rather than see it as an annoyance, {I am very sensitive to sound but also the vibrations that sound enfolds -it is not just the sound of cars driving by, it is all that comes with it, the feelings of that driver, all the stuff that driver is carrying and transmitting, it all astounds my senses}–I am now seeing the road as an entity, a bringer of news, a conduit for something that is going to come into my life that I can't grasp yet...who knows who will drive on that road by Apifera and meet me. The old farm was one thing, this Apifera is something else, and I am ready to embrace it.

Anyone seeing the farm in the snow, yuki-boshis all around, the sounds of the creatures, the wind over and through The Wood, they would feel its magic. I have felt it too, but it was the snow that highlighted my new sense of wonderment with this place, this Apifera-not the old one. The land here is more reserved, less embracing, to the newcomer. But its been waiting for me, as the house has, to relax a bit, and fully accept my environ. 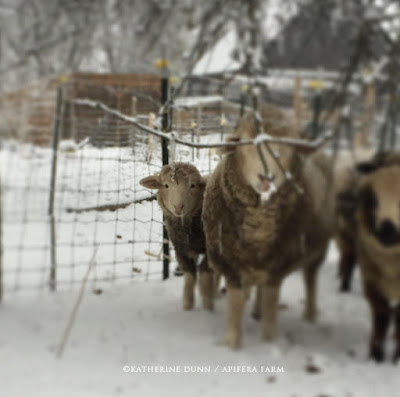 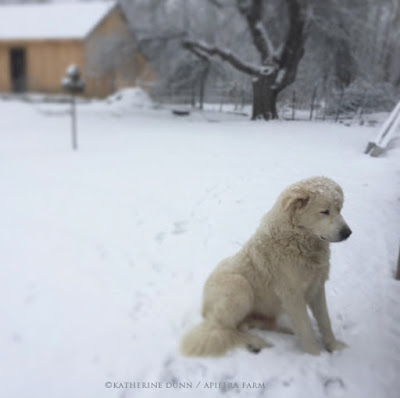 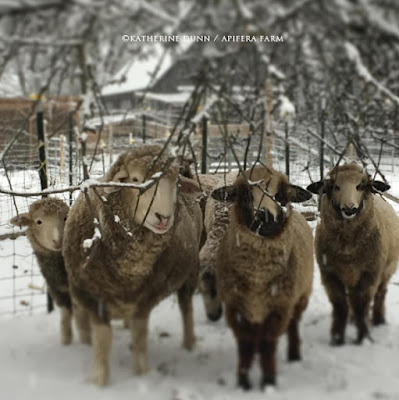 Posted by Katherine Dunn/Apifera Farm at 9:42 AM