When your likeness ends up in an antique shop 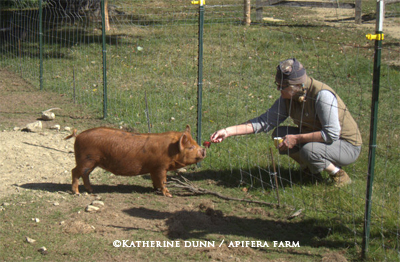 I kind of wish Martyn was a rabid photographer so he could take images of me with the animals. Years from now when we are long dead, someone would pick some of the images out of a shoe box in an antique store and think,

That looks like a good life, I wonder who she was?


At the same time, I hate having my image taken at this stage-or since about ten years ago I guess. I am not photogenic, and I just can't imagine that many of the images are what I look like. They don't match my insides, I like to think. I do know this feeling has been acknowledged by close friends and relatives when I see certain photos and cringe,

I know some people that always look like themselves in photos, consistently. I know others that always look way younger or way more 'something' in photos-I suppose this is worse, to look better than in real life, as when people meet you you they might wonder if they can believe their eyes.

A photographer friend told me a photo is just light, so when I see something that doesn't look like what the mirror shows, it's like a magic trick. Good way to calm down the photo subject down.

Anyway, my brother came and took some photos, mainly of the farm and a little road trip we took. I was happy to see this image of me and a pig. I mean it isn't anything special, but for once there is a photo of me to look back on in coming years. And in all fairness to Martyn, I think it's nice he doesn't photograph. I know of a couple where the husband never puts down his camera. That would drive me nuts, and I have no interest to share every second of every trip to the barn, grocery shop, cafe, good days and bad with the public. I can't imagine why you'd want to see it [collective eye roll from barnyard], that is, if you don't know me in real life.

But it would be nice to have one soft focus shot of me roaming in the field with donkeys on one side, my skin alabaster, the llama in the middle, and pigs trotting along, maybe a White Dog or two could be off in the blurry distance. You know, the kind of photo you see in an antique store and think,

I wonder who she was and what happened to her.

Maybe that's all I'll pass on to the next land dwellers. My books will be collecting dust somewhere in an attic and the grandchildren have to come along and clean the estate out. They might stop to look through one, just as I have done with old books, and find a connection with a photo, for whatever reason.
Posted by Katherine Dunn/Apifera Farm at 11:20 AM