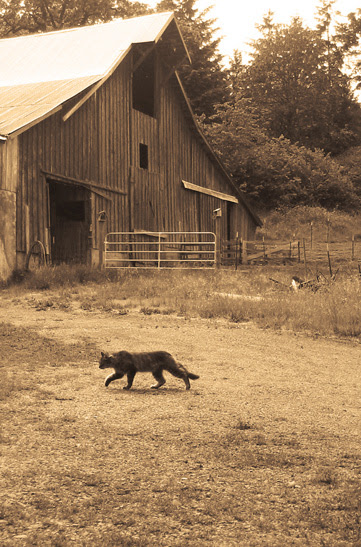 One's perspective can be refreshed by the simplest of moves. Such was the case last night when instead of sitting on one couch in our living room to look out and up to the upper pastures where the cows graze, I chose to sit on the other side of the room on another couch - I rarely if ever sit there, mainly because it is the 'dog free' couch - off white and smothered in quilts as the cat is allowed there - and I like to sit with the dogs, and Martyn squeezes in on the right. But this couch sits in a spot that allows me to look out one of the front windows. And as I looked out last nite, there was that old barn, so proud and still standing after over 100 years. It was as if our eyes met, and we were both simultaneously acknowledging our appreciation of each other. It was a short, simple moment, interrupted by dogs wanting me, cats at the front door, a tv story worth listening too. But it was a moment of being, that when strung together with other small moments makes for a peaceful and meaningful life - for me that is. 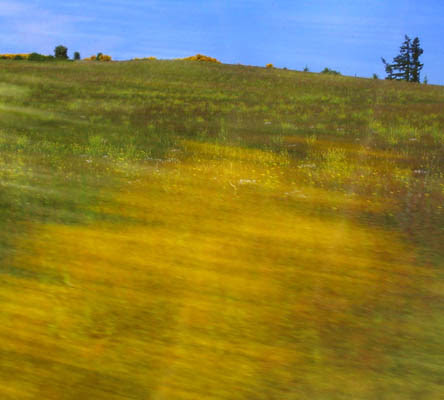 The other joy - except for the fact it makes my head feel like cotton stuffing - is that the scotch broom is in full bloom all over the county. Driving any of the country roads one is surrounded by yellow blurs - like a painting.

My overly tender heart has been suffering a bit due to the many baby bird deaths in the last two weeks. I've had too get somewhat practical and shorten my usual eulogies, and maybe are sent to rest where they will be found and eaten, not wasted. I did bury one starling that had died some kind of horrific trauma - I won't go into details - but I felt he deserved a place in the cemetery. And as I was feeding in the barn the other nite, I turned around and a small baby barn swallow had fallen and died on my corn bin. By the time I turned around to take it to bury it, a cat had eaten it whole. This was as it should be - although the crunching sound was rather graphic. While I hate the cats killing birds, I accept they are part of a chain of events here, and fallen birds must not be wasted.

The other big event of the week was Huck went into Wilco, our country feed store, for the first time. They allow you to bring your dog in, and I've been taking him every where I can to practice his new training and manner control. We were greeted by my regular sales guy yelling - "There's that pup that grew into a man!". I was beaming love. We listened to Neil's new "Living with War" CD the whole way home - singing out loud, LOUDLY, Huck's head out the window, lips flapping, my favorite view of him. Both of us full of hope, despite war, dead birds and no art sales in 4 days. When one has enough of the moments of being mentioned at the beginning of this passage, one has something rich and juicy to feed them through anything.
Posted by Katherine Dunn/Apifera Farm at 11:35 AM

oh katherine, i blubbered after I read what the feed guy said. thanks for triggering emotions in me that tend to get buried in the business of the day. I miss my old man mac!

I found a smashed bird's egg that had been blown out of a nest in our big elm tree yesterday in a storm. I always feel sad when I see these things on my farm. Your blog speaks to my heart.