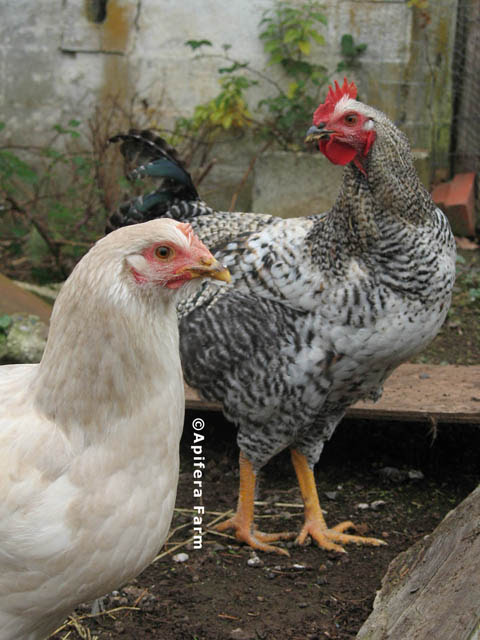 Every morning there is a strict routine of farm feeding, perfected over months of tweeking the system. On the way to the main barn, I now open the front door of the hen and gentlemen's house, so that the chickens can be in their yard, but not the barn yet until I'm done with chores. This keeps my perfected routine from going haywire, like having the gentlemen eat all the cat food before the cats get a chance.

So it is with great pleasure I introduce you to Chicken Named Dog, the white chicken on the left. She is not the prettiest of the chickens, she is all white with some hints of grey. And standing next to this gentleman she looks plain indeed. But Chicken Named Dog as become a favorite of mine. She is named such because she follows slowly at my heels, like a loyal dog. She doesn't get pushy really, she just stays right there with me, but always at my heels. If you are walking around and you sense a presence, it is Chicken Named Dog. Chicken Named Dog is the first one out the door, and I greet her with her proper name, "Hello Chicken Named Dog!". She does not have a nickname. Nobody called Black Elk "Elk", or "Blackie", he was Black Elk.

The funny thing is, Martyn is convinced Chicken Named Dog is a gentleman. I am convinced otherwise. It would seem when living on a farm one should know ladies from gentlemen, but, not always I guess. Either way, this is Chicken Named Dog.
Posted by Katherine Dunn/Apifera Farm at 11:13 AM

oh, i love her! or him! just makes me so anxious to have chickens of my own to name... give a littl' cluck to Chicken Named Dog for me. xo

i sure do love ms. chicken named dog. she looks like a loyal companion. but does she like pino?

Yay that Little Orange is back! And Chicken Named Dog has stolen my heart.:)