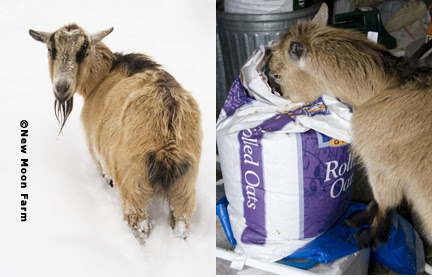 Apifera is not the only place where pygmies have had to trudge through deep snow - so too did Guinnias up at New Moon Farm .[It's official, I have slightly altered Guiness' name to "Guinnias" in honor of our love for Phinias T. Barnum. Ellen thought this was a nice tribute. We laughed though, that these creatures must think, "Have they ever just thought of asking me my real name?"]

Ellen sent me these pictures yesterday to let me know that the old man is just fine, and has not let the winter storm keep him from his morning routine - meeting her at the gate, and leading her to his favorite pastime - breakfast. It is now a sure thing that he and Frankie will have one huge thing in common, Breakfast Infatuation. Breakfast Infatuation is an incurable disease, common in many animals, but very prevalent in pygmies. One must be careful to secure all gates to feed areas- as the pygmy belly can pop like the blueberry girl. In all seriousness, this is an important part of goat raising - gate and fence security. I have known of some tragic cases, as I'm sure Ellen has.

I am so excited to get the old man home. We had hoped to go Monday, and probably could, but are waiting for a bit more road clearing. Our plan is too have him by next Sunday. Just enough time to sew matching outfits for him and Frankie....that was just a joke, but now I can see it in mind, the two of them waddling down the road in his and hers...hmmmm....

And I want to once again thank all of you who donated to help me in my senior goat journey. Like I said to all of you, your Apifera gift will arrive in January. I'll also be giving a little extra to Ellen for feed. She is bringing on 35 more goats next week - I hope to help her through art sales and any way I can throughout the next months. She is one of the many out there helping animals, and all on her own time. Bravo. If you love goats, pass her website on to friends. She is the real thing.

I did tell Pino about Guinnias. He was relieved Frankie will have Another. I did warn him he seems to have captured people's hearts already, and that he might also be getting mail in the future. Pino was not alarmed by this, and calmly explained without ego, "I suspect due to his short stature, many have looked down on him in his life, and that stimulates one's heart to overly project love, as it did mine."
Posted by Katherine Dunn/Apifera Farm at 5:54 PM

What a cute little goat!
It's funny you say you started out as a potter because I started out as a painter! And in fact, my painting professor in college, until I switched my concentration to ceramics and sculpture, was Catherine Dunn. She taught at the University of Montevallo but has since retired.

Oh! He looks like a scruffy ole' bugger! He will just fit right in.

I know everyone is waiting to hear of his arrival at your farm, his forever home.
I must tell you I am so in love with the percheron photo below, I can't take my eyes off of it! You MUST make christmas cards of it next year !

Hi everyone - oh I'm just so excited to get him. It's always fun bringing home a new animal, even though it can be chaotic in the barnyard a few days. - So funny you had a C. Dunn teacher! There are quite a few, the author who I've met and has some of my art, their is a cat vet too, funny.

Hey Deedled- are you implying we are all ole' buggers? Hah! We are I think. Yes, he and Frankie are probably 2 peas in a pod.

The Percheron photo op was cool. He and his other 3 mateys live up the road. They look quite funny standing on the fenceline with the mini donks!

I'm sure the old man will miss Ellen, but he's getting such a wonderful new home! It will be nice for Frankie to have a companion.

I have never given money to a more worthy cause. I know you will take good care of Guinnias and that he will be a happy goat for the rest of his life.
Thank you for this act of love for an old goat.

Oh Katherine, I'm so excited about Guinnias! I can't wait to see him on your farm, exploring his new home. What a wonderful way to start the new year. By the way, I have breakfast infatuation too. :-)