Cussin' with a wet foot 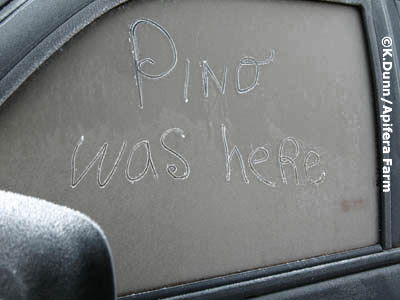 Post note: My foot is dry, the soup is on the stove, dirt farmer just came home and poured some wine, the Christmas tree is lit...I haven't yelled or sworn for hours.

Unfortunately, I did not stop at one bucket. I went on to Boone's bucket and yelled at it, then went on to the lower pasture to yell at a sheep bucket. All the while, my wet boot and socket froze to my lady like skin underneath. For the record, I did not yell at the chicken bucket because I'd wisely turned a heat lamp on in the chicken coop. But I did yell at the latch to their coop door that was frozen.

I also the told the water spouts that had frozen that they "were stupid and dumb". I told the barn "I left winter weather in Minnesota 7 years ago and this is stupid weather". And when the I couldn't get the frozen lid off the sheep mineral container, I yelled out to all who would listen - cats, one horse, three rams and a bunch of senior citizen pygmy goats- "Okay, that's it, that's all I can take, pack your hay, we're moving to Spain." No one even blinked.

I then went and found my three little donkeys, and proceeded to yell at their huge water bucket. Actually it's a water barrel, and I had to dig through a dark barn to find something to try to break the ice. "Ah! An ice pick! Eureka!" I trudged back to the iced barrel, my one frozen foot numb, and my cold little donkeys waiting patiently for water. "She can do it, she does everything," they were thinking. I remember thinking my parents could do everything and would save me no matter what happened. So...very...wrong.

I made one smash to the ice with the axe and proceeded to ice up my glasses. The next swing made a teeny dent to the 4" ice slab. And then on that third swing, well..."Hey, wait a minute, where did the ax head go?" Confused looks from donkeys.

The romance of having a 100 year old dilapidated barn with dilapidated stuff becomes less romantic when the dilapidated ax head falls off leaving you standing with a wet foot, and three very sad, cold, thirsty donkeys.

I then stepped it up a notch and switched from yelling to swearing at the water barrel. I told the water barrel it deserved to be all cold and icy, but with expletives. Looking at the faces of the donkeys brought me to my senses. I retrieved water from the house and carted it to the donkeys, just to give them a quick, warm drink.

I grew up in Minnesota and the rule was no whining about weather. "It's just weather," my mother always said. Oddly, I have become sort of a wimp in Oregon, and often even 40 degrees feels colder than it does in Minnesota due to the moisture that soaks into your bones. But when it freezes my water buckets and my pasture pumps, I allow myself to cuss. If you can't rant when when your buckets freeze, when can you? 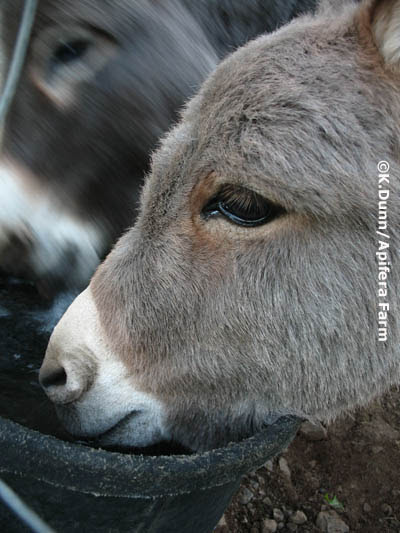 Frozen buckets call for a good cussin'...look at it this way, the animals would have done it for you if they could...

Better to take it out on frozen buckets of water than the animals or your husband.
The freeze will be over with soon. Have another glass of wine.

Too funny..and I so get it. I have a menagerie on some acreage myself. I have those rare moments, almost always during rotten weather, when I wish I were one of "those people" whose only need to get out in the weather is to dash from the front door to the car. That thought doesn't remain for long though. I know how very fortunate I am...soggy, frozen, or baked to a crisp! I wouldn't trade it for NUTHIN'! ♥ AK

I retold the story to Martyn last night and we were laughing pretty hard. And after living in Minnesota, this is sissy weather, but man, I always think of the sheep farmers in the east and midweat, how hard it must be. I don't care if you have winterized buckets, cold and wet animals are hard. But I'm not going anywhere either!

I grew up in Chicago and have lived and worked in Wisconsin and Minnesota. I currently live in Connecticut, where the New Englanders pride themselves on being "hardy," yet the winters here (save for the incompetent plowing and driving) are really for amateurs compared to the frigid Midwestern winters. And while your mother is right, it's just weather, it's also a pain in the you-know-what. We woke up to our first "big" snow and at 1 p.m. ET it still looks like a warzone here, even though it has changed to rain. Like my friends keep asking me, "Can't you get a job in a WARM climate?" Uh, I guess not. So yell away, Katherine. Sometimes acting out is good for the soul. (And now, if somebody could explain to me why the plowboys buy trucks that don't have front- or better, four-wheel drive, I'll be happy person).

Editor/EW you are cracking me up. If you want a laugh though, in Portland there is maybe 1 plow, no joke, so when it does happen to snow maybe 2 inches, they close everything. When it 20 degrees the other night, the news shows went crazy and had reporters all over interviewing people on the street - and the plows you mention, so funny. And do the plow boys go by your driveway, blocking you in again right after you dug yourself out?