Out of the corner of my eye 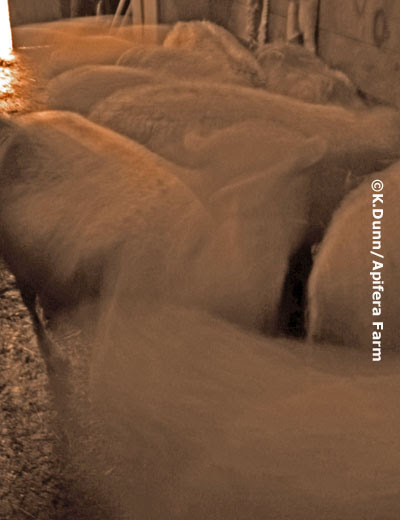 I've always loved the week between Christmas and New Year's Day. It's full of energy of the holiday, but there's a sense of hope and excitement for the coming year. The many wonderful things that came my way this holiday - mail from old friends, little surprise donkeys wrapped in boxes from blog readers arriving at my doorstep, brownies for the dirt farmers all the way from NYC, little gifts of phone calls from people that were out of touch - are now soaking in my head, leaving me grateful, and full of more butter than I normally eat all year.

But now I can return to the life I've chosen. We spent much of the last four days working on the fencing to plug up the many escape routes that Stella and Iris had perfected in their pasture. They looked perplexed, after all they've been escaping multiple times each day, daring Huck to be let out of the house to escort them back to the pasture.

"Why are they bothering with all this. Our daily escapes have been beneficial to all - we've done a lot of pruning for them," you can heart he goats thinking, as we worked securing the fence. Oh they were pruning alright, but pruning trees, bark, shrubs, and potted pines. This was followed by a day of reworking the ram pasture fence, since Mr. T recently decided last week to go for it, leaping over a fence electric wire and all to get to his ladies. "Testosterone!" I grumbled to the ewes, "the world would be safer without it." I'm hoping his escapade doesn't produce unplanned lambs in some of my young ewes, but we'll know in 155 days. I have one ewe who has liver disease, and she would never survive pregnancy. Fingers crossed.

So, I took time away from the computer, and Facebook, and Twitter, and online store updates and all the ongoing marketing conversations that go on now in this socially connected universe. I needed to step out of it for a few days. I had become much to concerned about why someone unfanned me, or why that person has so many Fans. Silliness that needed a to have itself tweaked out of me. 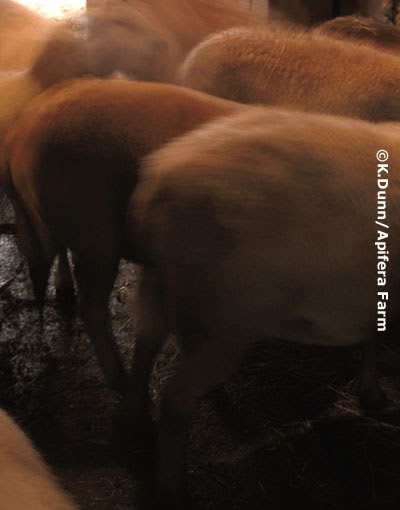 That's why I love the farm, it allows me to work hands, body and heart all at the same time. We also busied ourselves with making new lambing jugs, the small area where you put a pregnant ewe a couple days before she lambs. I've been very creative in how we've done our lambing pens, and it's always worked. But Martyn is building portable walls so I can put up pens, and then take them down after lambing. It's like the Sydell system, but on a dirt farmer's income. Besides, I like Martyn's handiwork better.

As I worked, I thought of the last five years and the many animals who were born in these stalls, or or died in them, some young. I feel Rosie so much, more than any other animal that has died here. She is so missed. And while I'm nervous for this year's lambing after the tragedies of last year, I also can feel the anticipation and excitement of March's birthing season. Rosie's daughters and now granddaughters will once again give birth on the same floor she died on. It makes sense to die that way, where your flock was born. I see her many times in the barn, or fields, some times just a shadow or blur out of the corner of my eye, but she's there.
Posted by Katherine Dunn/Apifera Farm at 1:56 PM

Happy New Year Katherine...I look forward to reading about all the new babies. Thank you for sharing your stories with us...i send much love.

Hope you have a happy happy upcoming new year and successful lambing...keep us updated...

Getting away from the computer, the Internet and all of its incumbent silliness is the best move ever. I have to say one of the best moments of my holiday was the nationwide Blackberry outage ... I rejoiced and enjoyed some peace and quiet from my job. Finally. You're lucky you have the farm. Nothing like good, honest, physical labor to keep your life honest!

gosh Katherine, I love this time for exactly the same reasons!....

and I am glad someone else is a 'freaky freak' :) about "who unfanned me?" and stuff like that....its not a healthy thing! :) so yeah, I too am gonna 'unplug' to get off that train!....good advice!

happy happy solstice, new years, and everything else in between to you and yours!

I had much the same apprehension when I read it was almost lambing time. I feared for you. But I must not because as you say, it is part of the circle of life. For us all.
Glad the little critter made it to your door. He needed a home.