The kiss of the goat 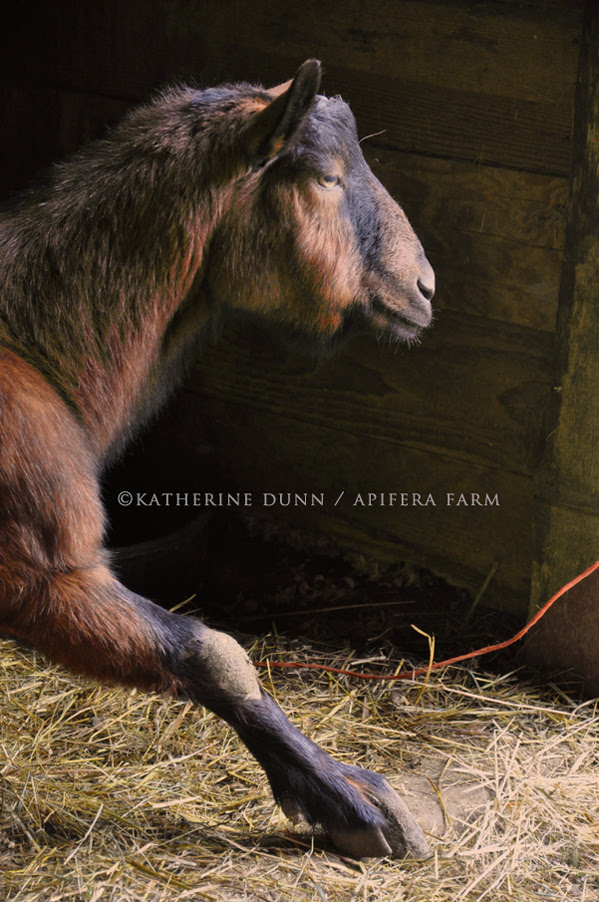 He's the most stoic of all the adopted goats. A complete gentleman, unless he's trying to establish his crippled footing for the food dish. Do not be deceived by his condition, he is strong as an ox.

In the turmoil of lambing season, through the sadness of losing Old Man Guinnias, there stood Stevie. Beautiful, brown, quiet Stevie. I was told by his former caretakers at Sanctuary One when we picked him up last year,

"He gives kisses." I had no reason not to believe them.

And I can attest that he does give kisses, each morning, each afternoon and evening - on demand. No, not a French kiss, that would be unnecessary for a goat - they can display much trust and compassion through closed lips.

"Good morning, Stevie," I'll say as I put my face near his. And without prompting, he reaches out with his closed lips, and presses them into mine, really softly, like a butterfly kissing a baby. Yep, say what you will, but it's the sweetest little kiss I've ever had from any creature two foot or four.

I have always massaged my old creatures, and young ones- but obviously can't give a proper lengthy massage to all of them. Caring for the lambs and needy mama ewes, and Old Man, and that very princess little pig, took massage time away from Stevie. So today I started giving him a good back and shoulder massage. He loves it.

Stevie was in a herd of goats in Oregon that were all being neglected. It was a bad case of neglect, and when authorities were able to rescue the whole herd, Stevie was the worse off. His toes and not been trimmed for so long that they were curled badly and he had taken to walking on his knees. But he'd been in this condition for so long his muscles and body had adapted, so he couldn't walk even after his feet were trimmed [and they will never be the same]. The Humane Society stepped in and - amazingly - helped fund a surgery for Stevie to adjust tendons so he could at least get off his knees. [Veterinarian Gene Kang of Oregon's Parkway Hospital performed the surgery]. He will never stand straight, but he can walk now. He is challenged though, he doesn't frolic or play with the other goats. He's very quiet and suns a lot, eats, rests in his hut, and gives kisses.

I imagine because of his size and condition, he might not live as long as a small pygmy, and I decided massages now on his shoulders 3x a week might really help keep him stronger longer. I do encourage him to walk a short distance each day.

Today when I went to the barnyard for morning feedings, there was no Old Man Guinnias. This is still a shocking observation for me which will lessen in time. But there was Stevie near the gate. It was unusual for him to come this far in the morning, especially in a light rain. He can't walk fast, so just as I used to guide Guin back to the barn, I walked slowly with Stevie. He stopped a couple times to look at me - so kiss worthy was his expression, but for his sake I refrained.

So lovely! Maybe the Old Man wrote to Stevie too, and asked him to look after you.

your stories are so sweet. thank you for bringing joy to my day.

Bless you for such tender care of your furred and feathered family.

Amid Sorrow comes a Gift... We are having similar experiences. You'll have to stop by the blog to read my story. Missing Apifera SO MUCH and my dear friend!

A handsomer goat I never saw, and from this post I think never a sweeter one either.

Thank you for the stories of your farm. Makes me want a "Stevie" kiss.

this touches my heart.
how lucky you are to have his kisses.