The turtle is given land 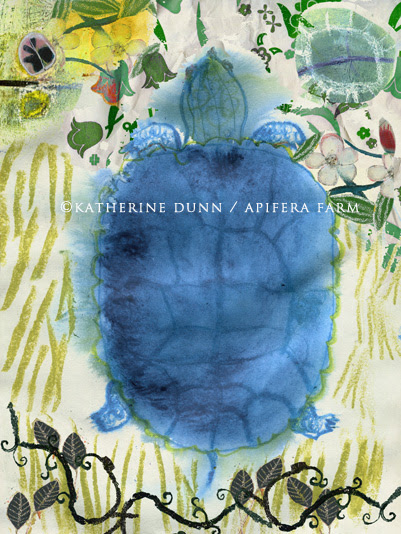 It was about 30 feet from the front gate, off to the side of the gravel county road - rural but frequented by speeding trucks and ignorants up the dead end.

"Are you lost? This seems out of place for your kind?" I asked the turtle.

"Not sure," the turtle responded, its head barely out of his 6" shell.

"You'll die a bad death out here. There's no water either. Come to Apifera with me," I said and before it could respond I'd picked it up and he tucked his head and appendages in its little home. It was the most polite turtle I'd met and when we entered the Apifera gates I had many good choices where to rehome the fine turtle.

"Are you a girl?" I asked, fearing I might be taking it from eggs. It didn't answer. Perhaps that is a question turtles find offensive. They do after all spend a lot of time in a shell, so announcing what gender they are might feel invasive and dangerous.

"It's so convenient to have a portable house," I said. "I will put you here, near the marsh, far from the main road so if you wander you will still be on Apifera land."

Turtle sat there for some time and finally a head poked out.

"Marsh front, very nice," she said. I say 'she' here because I really sensed a feminine essence about her tone.

I haven't seen her since, but it sure was nice holding a turtle again. I'd had so many nice days as a child amongst the turtles in the Minnesota marshes.
Posted by Katherine Dunn/Apifera Farm at 1:39 PM

You should never relocate a turtle from its territory. If you find it near the road, just move it safely off to the side in the direction it was heading to help speed it's journey.

Thanks for the tip- which I basically know- but considering the dead turtles I see n rural roads, I opted to do this, right or wrong.

Hopefully you got some joy out of the story.

I'm GLAD you opted to relocate little Ms. Turtle to Apifera.
What a lucky girl!

Turtles do not need to 'mother' their eggs. I would have also moved the turtle. If it wants to go to a particular spot (why leave Apifera though??), she will find her way. It will be all right.

I am a turtle lover. Several make their home at my home. I have worked for my state's animal conservancy project for turtles and snakes and can say.....good for you for saving her/him from the road. We need to keep all animals safe. And this won the door prize being able to live at your farm. Oma Linda

Thanks all. I think it's important to educate ourselves on what to do with injured birds, rodents, etc. But sometimes- you have to act from the gut, experience and the personal environment out here i know much better than someone who hasn't been here. So, I know I did the right thing. Linda- good for you for getting to work with your conservacy program! We have so many gardner [that's what I've always called them' snakes, and bull snakes. But the many semi ferels in our beginning years took a lot out [drove the Dirt Farmer nuts, he loves snakes].

I took land turtles home all the time
when I was young. They still live at my parent's house in Florida. Several of them go to the back patio and wait for my dad to set out lettuce for them. Considering I'm 51 now, these turtles have aged well!