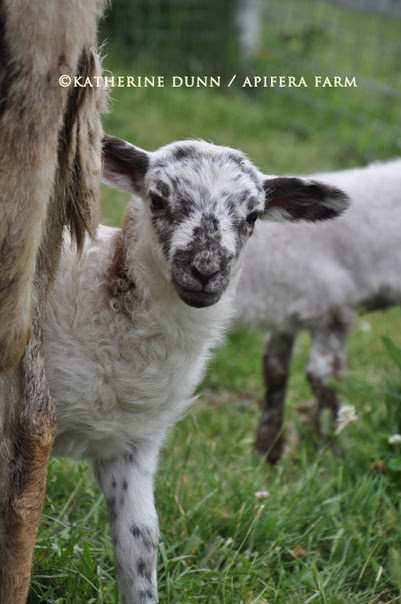 Elwyn Brooks White, aka E.B., is two months old this month. He sprung from the belly of Lilly along with his sister. E.B. was not a planned birth, but who in life walks the Earth as a planned anything?

So much for family planning.

You see, Mr. T. jumped a fence on January 24, and I wisely noted it in my day planner. Then I forgot about it. As mid June neared, my energies were focusing on Pie Day, and the lambing had been over since mid March.

"Hmmmmm," I said one June night over a glass of wine, "Lilly sure looks big."

"I noticed that too," The Dirt Farmer replied.

Then we had another glass of wine.

I had retired Lilly the previous fall. She had lost a couple teeth and she had served us well in 7 years and I wanted her to enjoy her senior years. She is a wonderful ewe and produces beautiful, big lambs who have grown into lovely sheep. Many still reside here and always will, like Betty and Bessie.

Pie Day arrived. I was baking pies the day before the onslaught of hungry pie eaters. The Dirt Farmer came in around noon to let me know there were two newborn lambs by the barn.

"No, another one," he said, I couldn't imagine what he meant. He tends to get the sheep mixed up.

It was Olive Oil, with two new girls. Olive had shown not a sign of pregnancy, and this had happened once before with her. She is a small ewe and I never wanted to breed her, but, nature with Mr. T as the lead actor, played it's hand - twice.

So now I knew Lilly had to be pregnant. I was not imagining it.

I decided to keep this fine fellow. There is something about him. And he combines the lines of both Joe Pye Weed through Lilly, and Mr. T.

I named him after one of my favorite writers and considering his marking it seems appropriate. 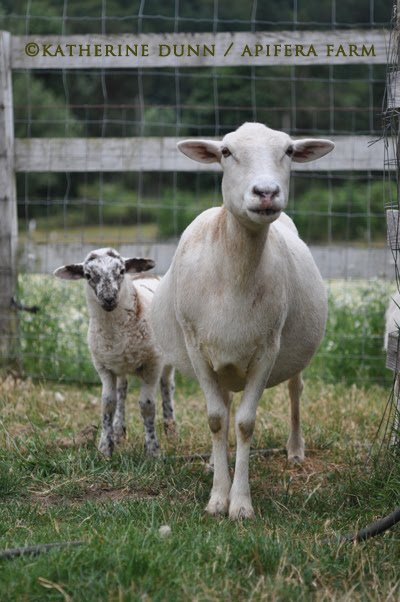 Email ThisBlogThis!Share to TwitterShare to FacebookShare to Pinterest
Labels: E.B.White, Sheep of Apifera

Thank you~you have put a daisy in my heart today...

The pictures are so cute :)